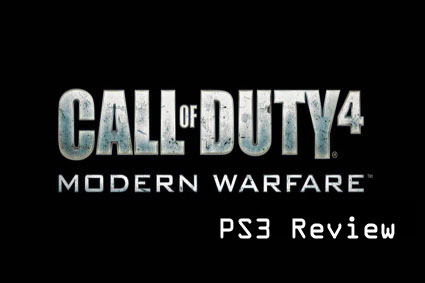 Needless to say, I was worried about Call of Duty 4’s technical performance on Sony’s machine. It is no secret that porting games from the 360 to the PS3 is “difficult” to say the least. Not everyone can pull it off and those who have succeeded with solid ports usually needed more time (Oblivion, DiRT). I had high expectations for Infinity Ward and Call of Duty 4 and I am happy to say they succeeded. My impressions of the 360 version is limited to the multiplayer beta, but based on my experiences with both versions; they are nearly identical. Do not take my word for it, the evidence is plentiful.

Natively, Call of Duty 4 does not run at 1280 x 720 on either console; it actually runs at 1024 x 600. As a result of the less than “HD” resolution (and other factors), focusing on any of the individual textures in the world yields some ugly results. It is an understandable trade off since near constant 60 FPS gaming is quite demanding. To counter the lack of technical firepower, the artists from Infinity Ward delivered an amazingly realistic portrait of the world in the midst of war. Call of Duty 4 is a fine example of why great artists cannot be replaced by technology.

Call of Duty 4 had me tinkering with the usual staple of modern weapons and technical gadgetry found in other modern era shooters, but Infinity Ward infused their distinct style and expertise into them. I bet even through a blind play test, I could tell just by firing the weapons that I was playing a Call of Duty game. If you were a fan of how Call of Duty games felt in the past, you will feel at home with Call of Duty 4. However, that is not to say Infinity Ward merely ported Call of Duty 2 into the modern era, they made a fair share of improvements as well. Sprinting officially makes its Infinity Ward debut in Call of Duty 4. The ability to dart from cover to cover, avoid grenades and snipers added more flexibility and satisfaction to the game and I am so grateful for it. Knifing and melee attacks also felt infinitely more gratifying than any other game in the series past or even on the market today. There was just something magical about how Infinity Ward executed their knifing action. Sadistic? A bit, but did you actually expect Infinity Ward not to amp up the intensity and shock value of their game?

Infinity Ward laid out some amazing set pieces and scripted events in Call of Duty 4 single player. I am not going to spoil too many, but I would like to highlight the AC-130 gunship mission because of how surreal it was. Unlike Treyarch and Call of Duty 3, Infinity Ward stuck with only two factions, the British Special Air Service (S.A.S.) and the United States Marine Corps (U.S.M.C), throughout the entire single player campaign. As the S.A.S., the majority of the campaign spread throughout European locales with plenty of forests and tall grass to wade through. The U.S.M.C spent a majority of their time in the Middle East with its trademark brown urban setting. Both sides have their fair share of excellent moments, but I will have to give a nod to the sniper mission on the S.A.S. half; that rollercoaster of events was just something I had never experienced in a game before.

One of the reasons why I enjoyed the S.A.S. sniper mission so much could be attributed to the fact that it strayed far away from the Call of Duty “go there to shut off the flow of enemy soldiers” formula. In an effort to convey the experience of overcoming incredible amounts of enemy pressure, the developers continuously spawn enemies onto the battlefield until I reached a checkpoint and effectively “shut off the flow of enemies”. It did not matter if it was physically impossible to fit 30 soldiers in that dinky shack, no matter what I did the soldiers kept spawning and I kept killing them until I ran out of ammo. This would not be so bad if the entire game utilized this formula, but here were instances where I thought I had to move somewhere to “shut off the flow of soldiers”, but it turned out I just had to spend time and kill off “X” amount of terrorists. Honestly, I expect the next instalment from Infinity Ward to completely do away with this nonsense and not use numbers to cover up their above average enemy intelligence.

I know a lot of people who purchased Call of Duty 4 for its multiplayer alone, and they have every right to do so. Infinity Ward took everyone’s love and adoration of stats, upgrades, customization and progression and injected it right into the core of Call of Duty 4’s online experience. Every kill yielded experience points which were used to level up characters, unlock weapon add-ons and unlock “Perks“. I personally loved the idea of earning these unlockable weapons, perks and the like, but I understand why some would be intimated and call foul with the fact that new comers will not be able to use some of the “better gear”. There are arguments for both sides of this issue, but I will not get into it here.

If there is one area which I am not particularly fond of in Call of Duty 4’s multiplayer, is how the kill streak reward system works out. If I racked up three kills without dying I was able to deploy the UAV scanner, an invaluable asset in Call of Duty 4 multiplayer. After racking up five kills in a row, the ability to call in air strikes was made available and if I racked up seven kills in a row, I could call in an attack helicopter. This all sounds great when your team is winning and you are bringing the pain, but it is not easy to mount a comeback when your team is being decimated by air strikes due to poor spawn locations or being forced to hide from helicopters in wide open maps.

Still, I kept playing and I will continue to keep playing for a long time to come thanks to how awesome the game feels with its responsive controls. Aside from the occasional helicopter or air strike death, there were rarely any deaths that were completely out of my control thanks to the return of the Kill Cam, a tool of learning and humiliation. Watch those 5 seconds of shame. The abundance of maps and game modes (plenty were repeated with slight alterations) offer a sizeable chunk of replay value as well. One mode which I have particular interest in is the Hardcore mode which eliminates most of the H.U.D. and increases the weapon damage. Unfortunately, I cannot tell you more about it since I have yet to unlock it.

The final point of Call of Duty 4 which I would like to touch upon is its sound design. No matter how fluid or how intense a battle may look, it is nothing with equally impressive audio work. In single player, the world and its ambiance will impress those with their 5.1 sound systems, but in the multiplayer it is the feedback of bullets penetrating walls and foes which brought me joy. How they were able to isolate and deliver the sound of a grenade dropping onto the ground is a mystery to a sound amateur like myself, but bravo Infinity Ward sound team. Additional kudos goes to the great voice work as well.

Call of Duty 4 is a fine game. The entire game is very much like its visuals where you have to take the sum of its parts and not focus on one or two aspects. The single player campaign was short, sweet and shocking hampered by a few archaic design choices. The multiplayer component is some of the most enjoyable and most demoralizing experiences online today. The good definitely outweighs the bad, and if you can accept the entire package Infinity Ward has to offer then you will enjoy this game very much.