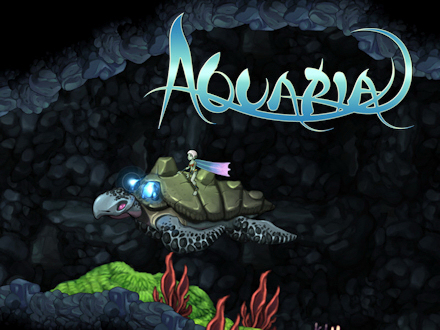 Independent developers have it tough when it comes to publicity for their games. They lack the budget, the contacts and sometimes the “know how” to actually promote their game. So to have an independent game featured on something like the 1UP Show means it must be worth checking out, right? Definitely. Aquaria is PC game developed by a two-man development team who call themselves Bit-Blot. I took their demo of Aquaria for a test drive and I thought it would be fitting to give their game a bit of publicity and share my thoughts about it.

Aquaria stars Naija, an underwater nymph of some kind who is in search of answers about her past and her surroundings. Aquaria’s style is similar to the Metroid formula which promotes exploration and acquisition of skills to advance the game.

Hand holding and guidance is nearly non-existent, however careful attention to details will yield results and answers to the game’s puzzles. The abilities Naija acquire come in the form of songs which are reminiscent of the songs played in The Legend of Zelda: Wind Waker. Singing songs is simple and only require holding the right mouse button and a series of mouse gestures. By moving the cursor to specific points in the circle in set patterns, Naija will be able to perform various skills such as moving giant boulders or forming a protective shield around herself.

Aquaria is beautifully hand drawn with bright colorful nautical creatures and plant life contrasting well with the ocean’s navy blues. The subtle water ripples when Naija propels herself through the depths and other niceties of that nature give the entire visual presentation a sublime look.

Even more impressive is Aquaria’s musical score which, is some of the most relaxing and mood swaying pieces of music I have listened to all year. It reminds me a lot of Pure Moods. I hope they release the soundtrack soon.

I liked how the story was delivered to the player through what appears to be recollections by Niaja herself. For instance, when Naija reaches a point of interest, the game rarely stops to spill its beans; actual cutscenes are rare in Aquaria. She usually narrates her thoughts through actual vocal speeches which explain anything from the actual story itself to hints on how to solve certain puzzles.

The control scheme I used throughout my initial play through of the demo was the mouse centric method where holding the mouse left button and pointing was sufficient in guiding Naija on her journey. I moved onto the Dual Shock controller I had hooked up to my PC and I felt at home. If you have a control pad, I definitely recommend trying the demo out with that first.

I mapped the buttons as follows:

While the game was well made overall, it does have one glaring oversight and that is the lack of widescreen support. Other than that, the game runs fine and does not ask much in terms of hardware requirements. Just do not run it in “Window Mode” if you do not want the occasional slow downs.

I enjoyed the Aquaria demo and I wish to play more of the game, but despite all the good things I have said about it, I cannot convince myself to put down the $30 for it right now. The biggest blockcade? It may have something to do with how the entire relaxing preface of the game contradicts the lack of “big comfy couch” when I am on the PC. Shallow and stupid reason? Perhaps, but I will tell you this: if Aquaria hits PSN I will buy it on day one. Sony, make it happen. You guys gave ThatGameCompany and the one man army, Queasy Games a chance; now it is Bit-Blot’s turn. In the meantime, I guess I just have to be patient.

Check out the demo and more info about Aquaria at their homepage.