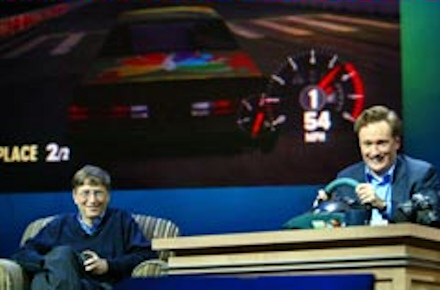 Some of my personal highlights from Day 2 of CES 2008:

CES and Bill Gates has been quite the tradition. I mean just check out the above picture of him and Conan racing from CES 2005. With this being Sir Bill Gates’ final CES 08 appearance, the tradition is coming to an end. Engadget got the opportunity to speak with the “soon to be former” Chairman of Microsoft and ask him some questions.

Sony demoed copying from Blu-ray disc today and what makes it so special is how they transferred a lower resolution version of the movie onto the Sony PlayStation Portable. Sony should have done this when the PSP first launched with  DVDs and not even bother with UMDs. Buying the same movie twice? Pfft.

Sony confirmed that OLED TV manufacturing is difficult and they are seeking partners for this new venture. Perhaps they should talk to Samsung. After all, it’s thanks to them that they are one of the best in LCD HDTV market. Personally, the longer they take to come to market, the better I feel about my latest 52″ LCD HDTV purchase.

I adore my iPod, but SanDisk products have always caught my eye. Check out the new Sansa View 32 GB flash based MP3 player which will only set you back by $349. The $79 4GB Sansa clip is also pretty good and very cheap.

NVIDIA officially announced their “Hybrid SLI” solution today. It is a great idea on paper, but I wonder how much this will benefit and cost. NVIDIA says it won’t cost us extra, but I will believe it when I see it.

Once again, MediaMolecule was demoing LittleBigPlanet. Nothing jaw droppingly new per se, but still worth a gander in this video courteousy of Playstation.Blog:

Last, but not least, Wii owners will have the chance to free their Nunchuk remotes from their Wiimote oppressors. This was announced in the past already, but I guess they they wanted to remind folks of its upcoming release.

For overview of other gadgets, check the great video at Mahalo Daily
P.S. – Paramount/DreamWorks “still supporting HD DVD”. Okay. Where are the HD DVD announcements which were scheduled for CES 2008? Perhaps it’s time to use the emergency eject clause.