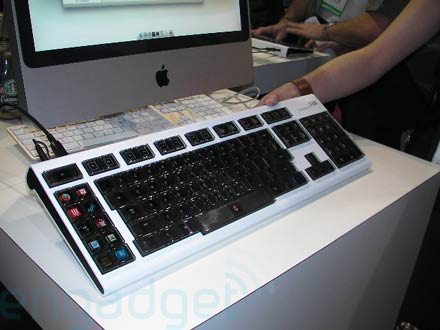 Day 3 of CES 2008 was filled with fewer bombshells, but it did have its fair share of highlights like the Optimus Maximus keyboard (thanks to Engadget for the picture above) which we have been hearing about for years. $460 for the lowest model? Not cheap, but it does feature OLEDs though!

New Line Cinema detailed their transition to Blu-ray with very little details. They are going Blu (effectively immediately), but no titles will be announced at CES 2008. Bummer.

Not a fan of Blu-ray or HD-DVD? How about streaming 1080p movies with 7.1 channels worth of lossless audio via satellite? Sounds too good to be true, but XstreamHD promises this. Why shouldn’t we believe them? They’re name consists of a pun and the letter “X”. Full of win? One can hope. Pictures of the required hardware can be found at Engadget.

Aside from LittleBigPlanet, Sony’s booth also had a demo of Metal Gear Solid 4: Guns of the Patriots on hand. Impressions from both amateur and professional enthusiasts were unsurprisingly positive. Cannot come soon enough, Kojima. However, why buy consoles to play games when your new Samsung HDTV itself could play the likes of Sudoku without additional hardware!

The pendulum that is DRM swings favorably for (paying) downloadable music fans as both Sony BMG and Napster bid farewell to restrictive DRM. Good riddance?

If you thought yesterday’s LittleBigPlanet footage was good, this one is even better: