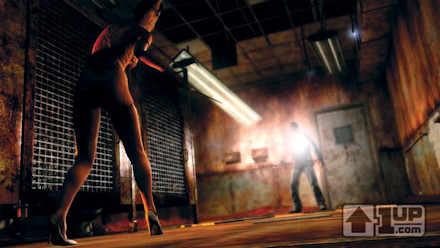 EGM’s October preview of the upcoming “Konami” survival horror, Silent Hill V, was posted by the folks at 1UP. Here’s a quote:

Silent Hill V probably won’t hit PS3 and Xbox 360 until fall 2008, leaving a four-year gap between this and the previous title, Silent Hill 4: The Room. That’s a long time, considering that the first four games all shipped within a five-year period, and the 2006 big-screen Silent Hill film adaptation undoubtedly broadened the series’ appeal. So rather than forging a storyline that closely ties to the previous games, The Collective instead chose to create a stand-alone plot with allnew characters to help reboot the previously dense narrative. But don’t expect to see completely unrecognizable characters, settings, and situations. “It’s important that the characters fit into the overall Silent Hill style,” says Horton. “There’s a certain stylized-yet-realistic believability — almost a heightened reality — that’s expected for the canon, and our hero, Alex Shepherd, has that familiar Silent Hill angst behind him…. You can see it in his eyes.”

Will it deliver? Hopefully. I guess we will find out in Fall 2008. You can read the rest of the preview over at 1UP.