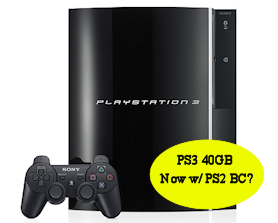 According to a job posting (poorly translated here) found on Sony Computer Entertainment Inc’s Japanese website, Sony is looking to fill, what appears to be, a “general PlayStation family emulation” engineering position. According to the job posting translation, Sony is working to improve and/or implement “PS/PS2/PS3/PSP” emulation for the PS3 and “next-generation systems” (PS4?)

So what does this mean? It’s highly probable that the PS3 emulation portion is for the next-generation console system, but what about the PS/PS2/PSP emulators? Are we going to see PS2 emulation return to the 40 GB PS3s? Shane Bettenhausen of 1UP has been quite vocal about the wanting downloadable PS2 classics and sees no problem with Sony retroactively implementing a PS2 emulator via download in the future –and nor do I. These emulators could even be for the PSP2!

As for the PSP emulator? It would make a lot of sense. You can already download PSP and PS1 games from the PSN Store via the PS3, but for now only the PS1 games could be played on both the PSP and PS3.