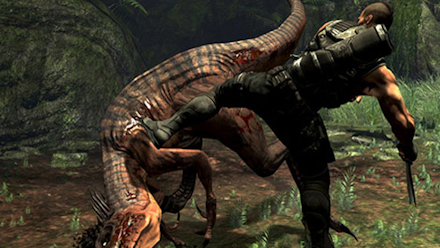 I did not own an Nintendo 64, thus the Turok series is somewhat of a mystery to me. I know what the games were about on a features and description basis, but if you were to ask me about the Turok experience — I would give you a blank stare. Fortunately, the latest instalment of Turok is supposed to be a reboot of the franchise and my lack of Turok nostalgia may actually benefit my view of Propoganda Games’ take on the famed franchise. I downloaded the 1.1 GB demo from the PSN store last night and after spending some time with it I have got to say I was right with my intial thoughts of the game; good, but not great.

The game utilizes the Unreal Engine 3.0 and certainly gives off that “UE3” vibe regardless of the jungle setting. I was extremely pleased with how smoothly the game ran and looked from a technical perspective. There were no texture pop-ins and the loading times were very respectable. However, the art direction left a lot to be desired. I found it to be derivative with no real sense of individuality. What disappointed me the most were the uninteresting human characters which could very well have been cousins of the Gears of War gents. (Turok reminded me of Santiago sans mohawk.)

The demo’s highlights were the dinosaurs and the interaction with them. I thought they were modeled very well and displayed a great deal of feriocity in their behaviour. I loved how they were able to knock Turok back and he had to wiggle the analog stick or rapidly tap the the L2 or R2 triggers to wrestle them off. As for Turok’s crown jewel? It would definitely be the brutal dinosaur executions Turok could perform with his knife. Think of them as Gears of War’s chainsaw kills, but with a knife and annoyingly context sensitive. (More on that later)

I hate holding the lack of control schemes against games based off their demos, but Propoganda games needs to allow players to swap the the should button and trigger assignments. The SIXAXIS controller is not the XBOX 360 controller and firing weapons with the R2 trigger is not as comfortable as firing them with the R1 shoulder button.

How about the demo’s gameplay itself? First off, starting a demo in a dark cave with no flash light has to be one of the weakest demo introductions I have played. I learned the basics in the cave and faced a few dinosaurs which I disposed of easily with the knife since it was more effective. Once I found my way out of the cave and into the jungle, I finally got a chance to face humans. I was underwhelmed by their lack of wit, but that could be attributed to the difficulty setting of the demo. The dinosaurs were supposed to add an “unpredictable” element to the game, but in reality they were just additional enemies to kill.

You can dual wield weapons like in Halo, but in Turok they’ve amped up the ridiculousness to an entertaining degree. Turok can dual wield shotguns, but what’s more impressive was how he could reload them both at the same time. I also found it awesome how he was able to attach silencers to both the submachineguns at the same time. The guy has four arms! There were other weapons as well, but they’re nothing to write home about.

The bow and knife, however were pretty good as stealth weapons and I believe Turok would be more interesting with just those two weapons. I was disappointed with how the knife worked, though. Unlike other games where I could swing the knife quickly to kill off enemies in closed quarters combat, Turok’s knife was slow and restricted to context sensitive moments. Once these moments appeared on screen via an R2 prompt, I could pull the R2 trigger and perform an execution move. These knife executions were nothing more than canned animation sequences, though. I was amused with how I had to “wait my turn” while a dinosaur was wrestling with an enemy soldier before I could perform my own knife kill.

So yeah, that was the Turok demo. If you have a PS3 or an European XBOX Live! account: it’s worth a download and a try. (U.S. gamers will have to wait until OXM’s window of exclutivity ends) As for an actual retail purchase? I would not. I believe it’s worth a weekend rental. Based on the demo alone, there is nothing here I have not seen done before. As much as I enjoyed the dinosaurs, I cannot justify a full price purchase. If you are a Turok fan, you may get more a kick out of than me. If you are just an FPS fan looking for something unique and grand, I believe you could do a lot better elsewhere.