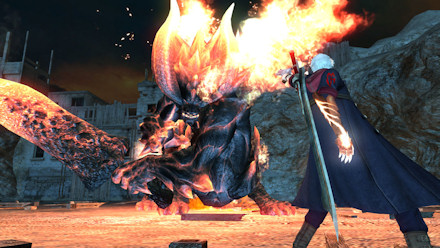 The Devil May Cry 4 demo was released for the PlayStation Store earlier today and for me, it was probably the first great demo of 2008. (Burnout Paradise demo be damned.) The demo should be quite familiar to those who have been following DMC4’s development; we finally get to play what the rest of the press have been playing since TGS 2006. Is it everything I hoped it would be? Or is it DMC3 tweaked and in HD? Answers to follow, my dear readers.

The 650MB demo was split into two halves. The first half consists of a level with a time limit where you could play as Nero and hack and slash your way to Berial, the fiery demon pictured above. The second half of the demo is merely the icy segment of the same level which leads to Berial fight, but it gives players the opportunity to take him on without having to repeat the level or worry about a time limit. I admit that I found some sort of sick pleasure with the time limit, since I tried at least two times to hack and slash my way through the level in order to see if I could finish it and Berial within the allotted time.

Unsurprisingly, DMC4 looks and runs brilliantly. The subtle details of the enemies, levels and Nero himself are very pleasing to the eyes. It reminds me a lot of Call of Duty 4 and how everything works so fluidly. 60 frames per second? I would not doubt it. Load times are also excellent since they are virtually non-existent. They could have done without a “Now loading” screen and it would have been fine.

The gameplay was just as I remembered from DMC3: fast, responsive and satisfying. I suspect the difficulty was set to normal or easier since the fodder did very little retaliating, but for the sake of the demo I am glad they kept it down in order to give a wider array of players the chance to grasp the depth of the combo system.

Nero’s arm is pretty bad ass and I certainly welcome the addition of it after spending some time with it. The combo system was familiar as many the classic moves were the same such as the dashing slice and lift. Obviously, it was not exactly the same with Nero’s arm and its ability to smash opponents into the ground. Aerial rave followed by a Buster was satisfying and I can’t wait to see what other abilities it may contain.

I spent at least 40 minutes with the demo and I definitely did not master it; there’s quite a bit of depth to DMC4’s combat system. I got a hold of the basic EXCEED system (ie: charging it by standing still), but I didn’t even know you could use it within combos itself. There’s an extremely informative mini-guide which could be found on NeoGAF that breaks just about everything you could do in the demo – awesome work by Dahbomb of NeoGAF.

So is DMC4 just DMC3 in high definition? It is, but it comes with a fair amount of tweaks, enhancements and polish. The game’s “archaic roots” and mechanisms have not changed much as evidenced by the existence of numerous invisible walls, arena styled rooms filled with monsters and the corny lines being spewed. However, you know what? I would not have it any other way.

Check out the official site for more details.