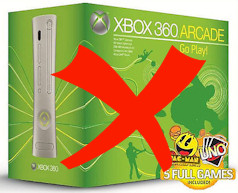 It’s a generally accepted that the XBOX 360 Arcade (formerly known as Core) SKU (sans hard drive) should not be purchased by anyone who considers themselves a gamer. Unfortunately, since the SKU exist; uneducated consumers will purchase it which means Microsoft has to do their best to accommodate them.

At the moment, the XBOX Live! Arcade download size limit is set at 150 MB. Awhile back, the limit was raised from 50 MB in order to for Konami’s Castlevania: Symphony of the Night to be released. Why was this limit imposed? Was it to help gamers save bandwidth? Or was it imposed in order to help Arcade SKU owners save precious memory card space? Guess which possibility I believe.

Well, it appears the 150 MB limit is not enough for Super Street Fighter II Turbo: HD Remix. This piece of news not only irks me as a Street Fighter fan, but as a consumer who may be receiving a scaled down product just so they can accommodate the few “gamers” out there who own a hard drive-less XBOX 360.

In addition to being a hindrance for developers, owners of the the Arcade SKU are unable to play Electronic Arts crashfest racing game online. It was recently confirmed that Burnout: Paradise for the XBOX 360 cannot be played online without the aid of a hard drive. It’s a damn shame.

Arcade owners, isn’t about time you got yourselves one of those $130 CAD hard drives? And to you prospective 360 owners: STAY THE HELL AWAY FROM THE ARCADE SKU!