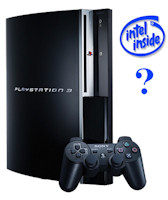 It’s hard to imagine Intel going out of their way to create a processor for anyone, but themselves. However, it appears that Intel is making a habit of taking custom processor orders – specifically from Apple. It started out small with a custom Dothan processor for the Apple TV and then a custom Merom processor for the recently announced MacBook Air.

None of these custom orders have been drastic, but they are not typical of Intel. Typically, Intel sells a platform (ie: Centrino) or a chip to its customers and then they would do their best to accomodate Intel’s products into their own. Even the original Xbox’s processor was an “off the shelf” Intel Pentium III based design. Not even the almighty Microsoft could sway Intel for a specially catered design for its first console.

But times are changing.

IBM was chosen by all three modern console manfacturers for their processor needs for a very simple reason: Big Blue was comfortable with listening to its customers requests, catering to them and selling the designs to its customers. Microsoft, Nintendo and Sony want the ability to produce their consoles’ chips for less when new technological advancements permit. By owning the chip designs, they are able to redesign and manufacturer these chips at their leisure.

Does Intel operate like its competitor, IBM? Not quite. Well, at least not yet anyways. Apple managed to convince Intel into creating a separate and somewhat unique product for its MacBook Air, but it does not hold the design rights to it. Also, unlike console manufacturers, Apple will release new models of the MacBook Air with faster processors. (Remember, console chips want to go smaller and cheaper, but not necessarily faster.)

So while Apple is doing what many thought would be impossible in the PC market today, what does the future hold? Will Intel continue to let its consumers lead the way? There are definitely signs, but until Intel can work with console manufacturers and let go of their chip designs; it looks like there will be slim pickings when it comes to quality console processors.