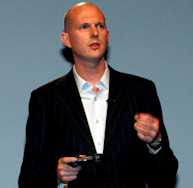 Every console manufacturer has their “face”. The person who interacts with the public and represents the organization. These folks aren’t your typical PR shills who toot their own horns or bash the competition without regard; they communicate their respective platform’s positions and strategies to the public in a very human way.

Microsoft lost their face last year when Peter Moore left Microsoft for EA Sports and now Sony is losing one of their most respected personnel, Phil Harrison. Nintendo still has Reggie — no worries there.

Next-Gen’s editor wrote a nice recollection of the importance of Phil Harrison and all the good he brought to the PlayStation platforms. To me, I’ll remember him as the well spoken bald dude who announced LittleBigPlanet and PlayStation Home at GDC 06.