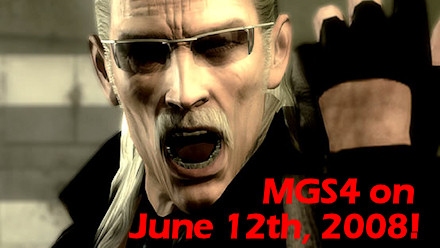 Finally, one of the main reasons why I purchased a PS3 has a confirmed release date. Konami’s Metal Gear Solid 4: Guns of the Patriot will finally be released on June 12th, 2008 for the PlayStation 3. In addition, the rumble enabled Dual Shock 3 controller will be released on April 15th, 2008 for an MSRP of $54.99 USD. (Just in time for Gran Turismo 5: Prologue)

Prospective PS3 owners will also get an opportunity to purchase a new 80 GB PS3 bundle which includes both the Dual Shock 3 and MGS4 for an MSRP of $499.99 USD. A hell of a deal if you’re a fan of MGS and have yet to pick up one.

Sony also announced a new PlayStation Portable bundle which includes a red PSP Slim, God of War: Chains of Olympus, the Superbad UMD and a gift certificate for Syphon Filter: Combat Ops from the PSN Store. Not bad, hmm? Definitely not bad considering it has an MSRP of $199.99 USD. Expect this bundle to arrive in June.

Along with Gran Turismo 5: Prologue and the Dual Shock 3 on April 15th, Sony will apparently be releasing a revamped PlayStation Store.