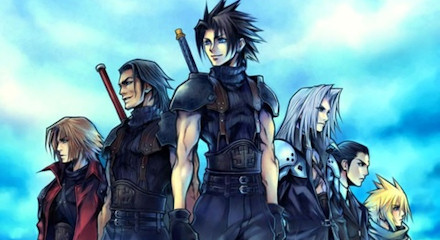 Crisis Core: Final Fantasy VII was released earlier this week and I am currently mashing my way through it. I played through Final Fantasy VII a while ago via my PSP and I was not that impressed with it. I’m going to blame poor translation and dated presentation for my lack of FFVII appreciation. I also didn’t like Cloud Strife as a character, but I did enjoy the story behind Cloud’s rebirth as ex-SOLDIER extraordinaire. So far Crisis Core is doing many things right with only a handful of peculiar quirks marring it; I’ll elaborate more in my upcoming review of it. Don’t expect it soon.

What you should expect soon is a brief write up on Professor Layton for the NDS. I’m very close to finishing it. Very close. I’ve also been playing a handful of Call of Duty 4. Still not as dominating as I was before, but I still forge through and enjoy the game. I want to buy the upcoming map pack, but you know my stance on paid maps. It has a remake of Carentan! I loved Carentan.

After the news of a new Sonic was released, I went all retro and nostalgic and got my hands on the Sega Genesis Collection for the PSP. I wanted Sonic and Sonic 2 in my hands, but then I discovered there was a more complete “Sonic Mega Collection Plus“. My Sonic needs were filled.

I was then reminded of Shining Force 2 and my inability to finish the damn game. It’s a very good game, but my two attempts always ended prematurely for unknown reasons. I’m hoping the DGEN emulated version for my PSP will yield completion. I love the game’s crude dialog.

My brother ordered the Terminator trilogy on Blu-ray, so we’re probably going to go through that this weekend. The Spiderman Trilogy sits untouched, but Arnold and his time traveling antics is too tough to pass up.

Oh, and there will be more Smashing.