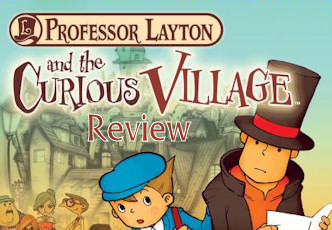 The Nintendo DS is a haven for variety and quirkiness. Many games found on this handheld console just would not work on other consoles – no arguments. One such game is Level 5’s Professor Layton and the Curious Village, the first of three puzzle oriented games under the Professor Layton name. Professor Layton utilizes the point and click adventure system, but instead of trying to find obscure ornaments to solve illogical puzzles, you are roaming through the village of St. Mystere seeking out puzzles, clues and mysteries – I think of it as an interactive book of puzzles. The question is: ‘How does an “interactive book of puzzles” translate into game?’ and most importantly, ‘Is it a good game?’. I thought it was a great game.

As soon as the game boots up, I was welcomed by the charming title screen melody. Its inviting notes were easy to listen to and set the tone of mystery well; you knew exactly what this game is all about by just listening to it. In fact, the audio work as a whole is well tuned to the theme of puzzle solving. Impressive. Even more impressive are the fully animated shorts topped with a couple of British accents — I love them and they do more than get the job done. The rest of Professor Layton comprises of simple, but effective European styled drawings that remind me of Tin Tin. In addition to the cleanly drawn characters, subtle animations and transitions give emphasis to the dialog being exchanged between the characters.

Using the stylus, you guide both Professor Layton and, his easy to anger sidekick, Luke on their quest to locate the Golden Apple in the little village of St. Mystere. The stylus does everything from moving, talking with NPCs, to uncovering hidden items; there are no mandatory button presses at all. Way to use the hardware, Level 5.

Professor Layton prides itself with logic based puzzles and I would agree — for approximately 95% of the given puzzles. The remaining 5% of puzzles are either too obscure or require meticulous decoding to work out. Careful reading and attention to detail usually gets the job done when tackling the majority of the puzzles, but there are puzzles where trial and error is the only option. Each puzzle’s difficulty is given a “Picarat” value; the higher the value, the more “difficult” it is supposed to be. I found the value to be extremely arbitrary since there were puzzles with Picarat values in the low 30s or 20s which stumped me while some of the 50s were solved with relative ease. When stumped, I could always rely on the three available hints to bail me out. They cost one “hint coin” (found throughout St. Mystere) each and, for the most part, prove to be extremely helpful – especially the last hint.

There are approximately 120 puzzles scattered throughout the village of St. Mystere with additional puzzles unlocked via downloadable content. As a result, if you find a certain type of puzzle which you just cannot crack; you can opt to skip it since you only need 100 puzzles to finish the game. Puzzle types range from your typical riddles to slide puzzles to simple arithmetic problems. Do not worry, though. You do not need algebraic skills to conquer the puzzles. You can use it, but a lot of the puzzles are solvable with simple deducing. Over thinking can make your life extremely difficult and annoying in Professor Layton.

The over arching story to Professor Layton gradually unfolds as you solve puzzles and talk to NPCs. I won’t get into the fine details of the story, but I will say that it’s rather simple and predictable. You don’t actually “solve the mystery of the Golden Apple”, but instead follow it and solve numerous unrelated puzzles along the way. Is it safe to tap your way through all the dialog sequences? You can if you wish, but I believe the story acts a solid framework for the puzzle solving antics. Additional motivation for progressing through the game come in the form of picture pieces and other knick knacks which are given when certain puzzles were successfully solved.

To sum up, Professor Layton is a suitable Nintendo DS game; it’s as easy to put down as it is to pick up, it oozes with charm and it makes good use of the hardware at hand. There are a handful of obscure puzzles, but thanks to the forgiving nature of the game’s design, only the perfectionist would find this fault to be a major one. So if you dig the puzzle genre and don’t have anything against simplistic mystery solving then Professor Layton and The Curious Village is an absolute no brainer.