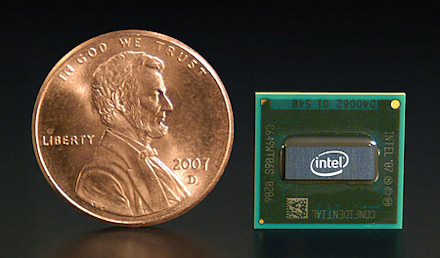 Atom is a big deal. With the success of the Asus EEE PC and Apple iPhone, the desire for more performance in smaller form factors is slowly ramping up. Imagine a handheld device like the iPhone, but with the power to run a game like Unreal Tournament 2004 and all the other typical PC applications with no slowdowns. Imagine the headache engineers must be endure in order to squeeze so much power into such a small form factor with current processor offerings.

The new Intel Atom architecture is hoping to achieve all that.

It’s not about having the fastest processors, but having a processor good enough to run the applications we want to run in those devices. Anand from AnandTech put it best:

“Blu-ray players that cost as much as PCs yet take longer to boot up and are beyond sluggish when interacting with menus. We can run Half Life 2 at 200 fps but we can’t make the UI on a TV respond quickly to button presses on a remote control?

The processing power required by the interface on a television, the software stack on a GPS, or even the non-decoding components of a Blu-ray player can easily be handled by even the cheapest desktop processors. The question isn’t “can we” make these devices faster, it’s what’s the bare minimum CPU we need to make them faster

Such a processor would have to be low power, low cost but without sacrificing performance.”.

What’s particularly significant about Intel’s involvement is the fact that they are bringing over the widely popular x86 architecture to these penny sized processors. This means many of the applications used on your PC today can be used elsewhere with minor rejiggering. The only obstacle is computing power.

Some of the devices have been demoed by the likes of Lenovo aren’t iPhone sized, but this is just the beginning. In future iterations of the Atom platform, Intel hopes to squeeze the same platform into smaller devices like cellphones.
If you thought penny sized processors were impressive, check out the ‘Moorestown’ motherboard and its credit card sized motherboard.

If you want more info about Atom, I highly recommend that you check out either the highly technical AnandTech write up or the friendlier TechReport version.