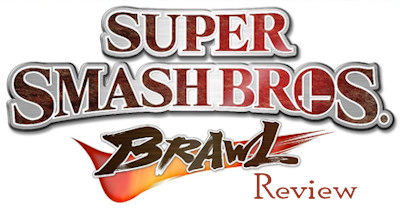 I realize this “review” is late. Part of it is due to laziness, but the other half is wading through the content Super Smash Brothers Brawl offers. The Smash Brothers series isn’t completely foreign to me; I’ve played every single one of them at limited amounts of time. I’ve always given the series respect for being a good party game, but as a fighter not so much. I simply never understood the depth or the intricacies. What makes Brawl so special, though? Is it the copious amounts of Nintendo content? No. I took me awhile to realize it, but like most successful Nintendo games, Super Smash Brothers Brawl is a game with several layers of depth.

On the exterior, Brawl is filled with nostalgia inducing characters and stages. Want Sonic to face off against Mario on Shadow Moses Island? It’s possible here. The vibrant characters and stages are some of the best renditions of Nintendo’s assets to date. All the characters may be unique in appearance, but functionality wise: not so much. I like to think of Fox, Falco and Wolf as the Ryu, Ken and Akuma of Brawl. It’s almost impossible not to find a character to suit your play style.

The GameCube controller should be your only choice when playing Brawl. Any other controller option sacrifices functionality thanks to its awkward button placements or the lack buttons. Using the Z button for block not the way to experience the game’s responsive controls. Even if you don’t like the GameCube controller’s button layout, you can always customize it. You can even map special attack to the C-stick for some B-stick shenanigans.

Customizing your experience is a large part of Smash Brothers. You may not care about the overwhelming amount of stage songs you can unlock at first, but when you sink 30+ hours into Brawl, you’ll quickly realize how thoughtful HAL Laboratory and Nintendo were. Brawl’s dual layer disc may have caused Nintendo some headaches, but the gigabytes worth of unlockable content keeps me playing. I even put up with the incredibly dull Subspace Emissary just to unlock content.

Purchasing Brawl solely for its single player offerings is a mistake. Brawl’s newest addition to the single player component, the Subspace Emissary, is a trite offering and does nothing, but play on the player’s nostalgia and warm feelings of seeing classic stages re-done in 3D. Why such disdain towards it? Since Brawl isn’t quite a platformer, the platforming elements had to be kept extremely basic and broken up into battle arena sections where generic “Heartless” like enemies could rain in. It was not completely bad, though. I did find the boss battles against the likes of Ridley and Porky to be entertaining. Perhaps I would have enjoyed the single player content more if they kept it under four hours instead of edging over eight.