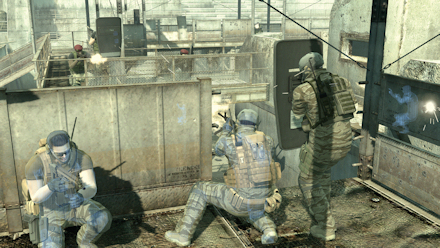 Metal Gear Online is not Call of Duty. It’s not like Gears of War. Or is it like Warhawk. Metal Gear Online is its own thing and the sooner you can accept the game’s rules and mechanics the better. I made the mistake of believing this game was Call of Duty 4 in the third person and how wrong I was. MGO has its share of quirks and unorthodox conventions, but after putting in approximately 7+ hours into it: MGO is growing on me.

Regardless of its rendering resolution of 1024 x 768 (or 1182 x 665p), Metal Gear Online still manages pull off impressive visuals with its noticeable lack of aliasing. The game runs at a steady 30 frames per second in Blood Bath, but on Gronznyj Grad I noticed a slight, but noticeable hit in framerate. What impresses me most though, is the animation, the smooth transitions and intricate interactions with other objects. Performing a Closed Quarter Combat (CQC) move isn’t just a canned animation which cannot be interrupted. If a buddy of yours is being overpowered, you can take care of his assailant with a well placed shot.

Kojima Productions only parted with two maps for the beta (Update: Actually three, but I’ll talk about that later), however they are fairly sizeable maps with plenty of substance. Multiple floors and myriads of obstacles keep the levels interesting allowing both long range and close quarter battles to take place. I’ve played the maps as both the Red and Blue teams and so far, they seem to be well balanced for non-mirrored maps – nobody gets a clear advantage. I’m hoping the remaining 3 maps debuting with MGO retain this trend.