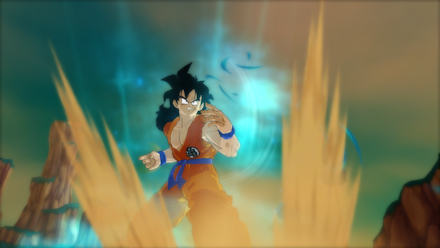 It’s been awhile since I was excited for a demo. Today, the Dragon Ball Z: Burst Limit was released for both the PlayStation Network and the Xbox Live! Marketplace. But why be excited for a Dragon Ball game? Well, I for one was/am a Dragon Ball fan. Secondly, this is a DBZ game developed by Dimps, the talent behind DBZ: Budokai 3 and co-developer of Street Fighter 4. So, I downloaded the 478 MB demo and desperately held hope for a spiritual successor to Budokai 3 and you know what? It is.

Budokai 3 already captured the look of the Dragon Ball Z anime series in my eyes and I honestly believed that there was no need to improve upon the visuals – and if there was, I didn’t think it would be noticeable. Dimps proved me wrong. Motion blur, depth of field and a extremely vibrant and large character sprites makes a hell of a difference. There was only one level provided in the demo (good ole green plains), but its rendition was the best yet. The background has a warm soft finish to it which really brings out the characters, but not so much that they feel out of place — it works well and I like it.

Goku and Yamcha, the two playable characters of the demo, were more or less the same as their previous selves. Goku has his trademark KameHameHa and Yamcha has his Wolf Fang Fist; both functioning as expected. Ki is still required to perform moves, but obtaining ki was drastically altered. You no longer need to stand vulnerable and summon ki anymore since everyone’s ki automatically regenerates. It keeps the action rate high and discourages the fleeing and charging of past games. Also new to Burst Limit is the Aura Burst which, I assume, increases attack power for a brief period of time while consuming your ki bar. It also enables “Ultimate Special” finishes.

As for game modes? Only campaign mode was offered. Judging by the box art, it looks like we’ll be visiting the Saiyan, Frieza and Cell sagas once again. Spoken dialog was in English for the demo, but I hope the retail version has Japanese voice overs as well. Not just for nostalgia’s sake, but to hopefully sync the dialog with the facial animations as well.

Instead of just being bookended with cutscenes, Burst Limit also splices “Dramatic Moments” into the battles as well. For example, when Goku performs a KameHameHa against Raditz for the first time, a brief cutscene will appear revealing a small piece of the story. It’s not just for story, though. It also alters the opponent’s difficulty, defence and other stats as well. At the end of the battle, you are then given a grade depending on how many of the Dramatic Moments you triggered amongst other battle objectives. Not sure if I like it, however it is an interesting way of telling the story and instilling replay value for the perfectionist to say the least.

The Burst Limit demo achieved its objective: it convinced me that this installment was more like Budokai 3 and not Tenkaichi and it also convinced me that after all these years, Dragon Ball Z games can still be fun. I relive a piece of my childhood every time I hear and enraged Goku scream “KameHameHa“. So if you’re a fan of Dragon Ball Z (serious or casual) or you are looking for more Budokai 3, give Dragon Ball Z: Burst Limit a spin. It’s shaping up to be a return to form.