Captivate is Capcom’s own media event. Nothing super exciting happened, but there were some noteworthy pieces of media and info which I stumbled across.

Unlike another Street Fighter game, this one is actually impressing me with every showing.

The ‘Vengeance’ Trailer is definitely worth watching if you haven’t seen the game for awhile. Ignore the announcer and his ramblings; he’ll stop at the half way point and then you can enjoy some fantastic Street Fighter IV footage. If you’re wondering how the game is shaping up, it’s actually going very well according to impressions from Kotaku.

People will be pleased to know that the console versions will include the following exclusive features:

They didn’t confirm anything else yet, but I’m willing to bet that there will be extra characters and stages as well. If not, they could always torment us with DLC.

A lot more gameplay media (off screen) can be found on GameTrailers. Do it. It’s awesome.

I was stoked for this game. Was. How times have changed. IGN put up a preview of the upcoming HD revival, but it’s not doing it for me. Just look at this: 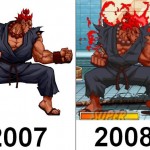 I laughed. (Thanks to MOMMY DEAREST of NeoGAF for the comparison pic) It’s obvious that this project is off the rails and cutting corners now. The sprites look like they’ve been upscaled. Notice how the edges and the details on Akuma, in general, appear to be blurry. Oh, and the UI sucks. Very disappointing, but can I blame them? Sure I can. Don’t start something and then half-ass it when you realize hand drawing every frame is going to be a bitch. Do it right or don’t do it at all.

As for gameplay videos? I couldn’t find any new ones from Captivate 2008.

The rest of the games found there don’t warrant comments simply because I’m liking what I’m seeing.

A solid lineup from Capcom.