Eden Games’ Alone in the Dark for the Xbox 360, simply put, isn’t very good. In fact, it made the very short list of games which I’ve stopped playing due to frustration, annoyance and sheer lack of fun. There are a few noteworthy qualities which did make me nod with approval, but for every single one of them there were dozens of moments where I could not help, but shake my head disappointed.

Alone in the Dark starts off very promising with its technically proficient visuals – it runs well with only minor screen tearing. The protagonist, Edward Carnby, was easily the most impressive character model out of the lot. I had no complaints about how Carnby and the rest of the cast were presented, but that ‘Sarah’ was noticeably lacking. There was a stark contrast between her and Carnby and since she’s the other protagonist in this fable of horror, it’s not something you can easily ignore. While we’re on the topic of ignoring, Sarah did an excellent job of ignoring my presence by regularly getting in my way. In fact, I thought Sarah was just with Carnby as a hint dispenser and to occasionally play the role of human pylon.

So what brings Carnby to Central Park? While, I didn’t find the plot to be particularly captivating, it was one of the better aspects of the game and it would be unfair for me to spoil it. Carnby’s journey does tread supernatural and religious ground with talks of demons, the sins of humanity and the resurrection of higher powers. It didn’t keep me at the edge of my seat, but it was just enough to string me along for a majority of the game. Unfortunately, that string wasn’t enough to pull me through to the very end.

A large chunk of Alone in the Dark’s problems can be attributed to the grossly inadequate and uncooperative combat controls. Mapping 1:1 wielding of objects to the right analog stick is a fantastic idea and lends itself greatly to environmental interaction, however when you put that control scheme in the middle of a fight: things fall apart. There’s a noticeable disconnect between Carnby’s swings and what happens on the screen. Sometimes I was lucky and the enemy was struck down, but more often than not, he’s swinging and missing. I found it to be more effective if I was holding out the burning objects and simply ramming into enemies.

Yes, it’s true: only fire can purge the world of demons. This element alone may sound boring, but it did allow me to me to concoct explosives made from a can of mosquito spray and a Molotov cocktail with a bottle of vodka and handkerchief that I picked up from a trash bin. You can even create fire bullets by dousing your handgun with alcohol. It’s ridiculous, but it was by far the most effective weapon short of throwing and detonating the makeshift bombs. 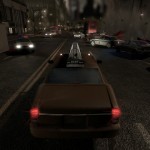 The next bits of nuisances pertain to the unforgiving gameplay sequences. Most of them were quite spectacular first time through, but not the third, fourth or fifth time! The inability to skip cutscenes only exacerbated the problem further. If you’re using these predetermined sequence of events don’t turn it into a game of trial and error where the player’s only chance of survival is to die, memorize and retry – this is not fun. It didn’t matter if I was scaling the side of buildings or driving through the city, it all became irritating after multiple retries. It’s also particularly irritating to know that Alone in the Dark’s poor driving model was developed by the same Eden Games who made Test Drive: Unlimited, a more than capable Hawaii based driving game.