It took several public demonstrations to convey what LittleBigPlanet was all about. After it was all said and done, I was convinced that this was the Lego set for the gaming generation. The opportunity to easily build a 2D platformer with relative ease sounded like an excellent opportunity to flex creative muscles. Then to find out that there would be a method of sharing these creations with others; the potential to be amazed and floored by the talent of the world was there. Media Molecule undoubtedly created a unique product for the home console market, but can it resonate with the masses? Can someone merely be a player of LittleBigPlanet and completely ignore the construction aspect of the game? I took the time to contemplate all of that and more. 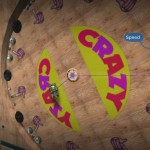 “How in the world did they make that?” I asked myself that question numerous times throughout LBP’s campaign. It’s not a question that I ask very often in other games because I will never be able to make a Gears of War or even a Super Mario World. Everything in LBP’s campaign could be recreated using the available toolset. The tools themselves are easy as pie to use and putting them to good use only requires imagination and a chunk of time to invest. With all the knick knacks and gadgets available, you could make just about anything – and it doesn’t even need to be a 2D platformer!

I know just about everyone wishes they could just sit down and create something brilliant, but unfortunately they don’t have the luxury of time. Even if you don’t have the time to take on the level creator, at least try tinkering with existing levels. Add a new enemy type, move a platform or maybe even add more environmental hazards for added challenge. Hopefully, you’ll grow an appreciation for the hard work people have put into LBP. 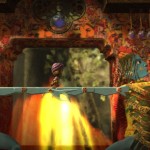 Finding people’s hard work online seems simple at first, but the weaknesses of its simplicity became evident once I wanted to sort the content. Disappointingly, there was no way to filter levels by “most played”, “most hearted” or even by rating. This is the one area which I hoped they would address in the final build, but unfortunately we still have to sift through an unorganized arrangement of levels. The best content eventually makes its way to the first few pages, but it is far from ideal. Lucky for us, Media Molecule has been listening to the complaints.