I’ve never played a post apocalyptic game before. It seems like a theme which should have been exploited to oblivion and I’m surprised not many games utilize it. Perhaps it’s too depressing. Or perhaps because a world with practically nothing left would be difficult to entertain gamers with. Whatever the case may be, Fallout 3 isn’t just your every year western RPG game. Claims of “Oblivion with guns” is a mystery to me as I gave up on Bethesda’s high fantasy role playing epic. I didn’t give up on Fallout 3 though. There was a time when I wanted to, but in the end I am pleased to say that I enjoyed my journey through the Capital Wastelands — despite its flaws. 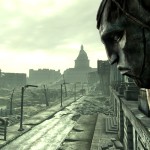 A strong sense of time and setting served as Fallout 3’s opening moments. It’s one of the most memorable openings rife with genuine efforts to dress character customization screens with something more meaningful. (I won’t spoil it, as it was quite ingenious.) Bethesda grabbed me immediately and did their best not to let go. Life in Vault 101 was simple and as young buck starting out in the world, I was anxious to explore the world, meet its people and listen to its story. But, alas I was not ready for the harsh reality of Wastelands.

Perhaps that was intentional.

It didn’t take long before I was shaping the game in my own way. I chose to veer off the beaten path and explore the remains of what were once the suburbs of Washington D.C. And, to my astonishment, there was not a whole lot to unearth. There was rubble, swirls of dust and the occasional mutated wildlife, but it wasn’t like a Fable II or a Mass Effect where the initial stages were plump with content. It took a fair bit wandering before the trickle of content turned into an all out flood.

The fact of the matter is: Fallout 3, as a whole, is bit of a sloth when it comes to delivering the fun immediately – especially with its take on the action RPG formula. Like Mass Effect, it was a role playing game before a shooter and because of that I was initially frustrated by the combat. My frustration subsided as I diverted more points into my ‘Small Arms’ skill, however the game did a poor job of communicating my inferiority. A reticle change to reflect my accuracy would have sufficed. Then again, it would have been pointless since the enemies would eventually zero in on my position regardless of their own well being or abilities. 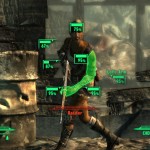 I rarely spent time outside the comfort of the Vault-Tec Assisted Targeting System despite its reliance on action points. I surrendered control over my attacks to hidden formulas of chance, skill points and distance because aside from a select few, I found utilizing weapons in real time wasted ammunition. With time, I learned to rely on the pause and aim system for its effectiveness and for the gory spectacles. I also quickly discovered that luring opponents around corners and unloading shotgun blasts via V.A.T.S. was the most efficient strategy – simply select the head for easy mode I guess.

I got over the lousy combat with the help of the Capital Wasteland’s many tales. Eventually, I met Super Mutants, slavers, prostitutes, raiders and even cannibals. Not all of them shared their stories via dialog though. Their homes and their computers told me things that would bore some, but enlighten others. When I reached the denser areas of the of the D.C. core where nearly every building was of some significance, I was in questing paradise. There was just so much to do, see and learn; Fallout 3 began to open up and get into the rhythm of things. I knew I was in a good thing when I was finding quest items before I was even asked to fetch them. I adore being rewarded for going out of my way to explore.

When Elena stepped out of Vault 101, I decided she was going to be a goodie-two-shoe. She could have become a pugilist, a lover of energy weapons or a smooth talking thief; the options were plenty and in the end, I settled with being a frugal firearms aficionado. These chosen skills not only influenced the battle, but also the outcome of quests and the choices I could make throughout the game which eventually led to one of the game’s multiple endings. The manner which these choices were presented weren’t as clear cut as in Mass Effect and I liked it that way. It meant I had to ponder over my choices.

“I’m as a corny as a Kansas in August. I’m as normal as blueberry pie.”

Such a peculiar lyric to hear over the in-game radio when I was picking locks searching for bottle caps and other treasures. It fit though. The crackly old time radio sound was a strong beacon which I could always rely on to keep in the mood of Fallout 3. I can tell Bethesda wanted to maintain the same level of immersion from the early stages of the game and they succeeded with the aid of radio stations and that personal PDA on the wrist known as the Pip Boy. Its green screen housed the stats, the inventory, the maps and quest logs, but it was a piss poor substitute for a flash light. However, despite all their efforts for keeping the player in the game, things began to unravel. 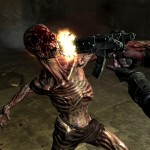 As the hours ticked by I began to uncover and reach the limits of what was possible and available. I don’t mean the age old problem of seeing and hearing duplicate non playable characters or the repetitious voices and songs of the radio. No, I’m talking about insurmountable amounts of rubble which conveniently funneled me into underground tunnels and for certain quests, their outcomes were independent of the choices I made. In addition, certain NPCs cannot die or be reasoned with. I guess much like the claims of “fully destructible environments”, Fallout 3 isn’t “a completely open” experience where you could do what the hell you want and how you want. I will give Bethesda credit for creating one of the best illusions of freedom in a game.

“I spoke to the guard and after a disagreement over the topic of slavery, the entire town erupted with gunfire. I had no choice, but to destroy the town’s slavers and free the captives.”

In nearly every instance, the retelling of my adventure sounded better than the act itself. Details such as the inhuman qualities of the NPCs and how they were void of expression were often left out. Stories of my exploitations of the enemy’s lack of intelligence or the fact that nearly all my escapades took place during the daytime were also kept to myself. And that’s the way it should be. Fallout 3 is about the journey and my moments throughout it. The mechanics of the game may not sparkle with polish, but with the help of the game’s immersive qualities, it can be forgiven — I did and I’m sure others can as well. It may not boast the greatest depth, but the breadth of Fallout 3 is out of this world.

For more information on Fallout 3, visit the official website.