Videogames can be more than just entertainment. They can be a vessel for escape, a glimpse to something foreign or even a tool of learning. I didn’t think of Sega and Amusement Vision’s Yakuza 2 as any of that prior to my time with it. To say I was enamored by this action adventure would be putting it lightly. I adored Yakuza 2 for everything it did right and respected it for everything it attempted. So let me delve a bit deeper and explain why this PlayStation 2 game was one of my surprises of 2008. 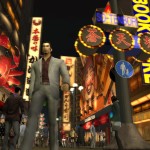 Yakuza 2’s backdrop was a true-to-life rendition of some of Japan’s iconic urban centers — or at least that’s what they would have me believe. I’ve never been to Japan nor am I familiar with its cities, but I have been told that the Yakuza series have gone to great lengths to bring the likes of Osaka into their game. Whatever the case may be, it was believable world filled with shops, clubs, restaurants and other establishments to visit. Some of these locales were familiar venues, but others (like the hostess/host clubs) were intriguing and completely alien to me. Then there were the hard-to-believe concoctions like the seedy underground villa known only as “Purgatory”, but even they somehow fitted in.

Whilst an interesting setting lured me into the yakuza world, it was the crime drama and its unexpected tone which convinced me to stay. Even through the aged tech of a 2006 PlayStation 2 title, the developers still managed to deliver some of the most impressive examples of videogame cinematography. Top notch voice acting coupled with camera work you don’t typically see in games helped present Yakuza 2 in a professional light; some of this stuff could have been from actual movies. Moments of the narrative may have been a tad predictable, but as a whole it was entertaining. 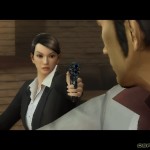 Kiryu Kazuma was fellow who loved to fight, but he also yearned to separate himself from the criminal underworld. Through the use lengthy flashbacks, I was able to bring myself up to speed on key events and characters. Throughout the game, there were references which I was oblivious to, but they were usually tucked away within side missions. A lot of weight was put into the key players through repeated exposure and within an hour or two; I was able to empathize with what was happening to these people. And let me tell you, life in the yakuza is brutal; a lot of problems begin and end with violence. Oh, and kidnappings. Kidnappings were also commonplace; however I never felt that it was forced tactic. 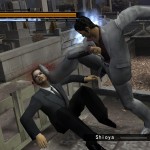 The action bits of Yakuza 2 harkened back to the days of Final Fight where fisticuffs and knees to the backs of heads solved all of life’s problems. Enemy encounters on the streets transitioned to arenas blocked off by physical objects or throngs of people who’ve gathered to witness Kazuma duke it out with hooligans who just couldn’t tolerate the way he looked. As a hardened fighter, Kazuma dished out and took a great deal of punishment. Simple mashing of the attack buttons yielded moderate amounts of success, but I found no joys from that tactic. I preferred to maintain “HEAT” mode where Kazuma could pull off context sensitive attacks and counters which he picked up from books, movies, other people in the world and old fashion experience points.

Although the fighting mechanics were fairly straightforward; it wasn’t perfectly implemented. The context sensitive actions had very small windows for player input and the camera went awry a bit too often for my liking. The lack of challenge was a bit of concern until I reminded myself that this was not a full-fledged fighter. Being able to wield objects from the environment as weapons was a great touch, but using my own hard earned weapons was always up for debate. Did I want to make the fight a bit easier with this awesome steel sword? Or should I save it for later because after a dozen swings or so, it’ll shatter. Couldn’t they open up a repair shop or something?

For someone who’s open to new and interesting things, I was all over Yakuza 2. Familiar touchstones such as the simple yet satisfying combat served as something I could get behind. While modern Japan and its culture served as the new and exciting unknown which kept my interest going. Tying these two elements together was a story which not only let me proceed at my own pace, but also kept me anticipating what was going to happen next. There were a few bumps along the way, in the form of technical limitations and design quirks, but I was able to overcome them with ease. I learned, experienced and seen a whole slew of new and exotic things courtesy of Yakuza 2. It may not have been the high definition experience you’d find on a PlayStation 3 or Xbox 360, but it was something unique, different and well worth a play through.

For more information on Yakuza 2, visit the official website.