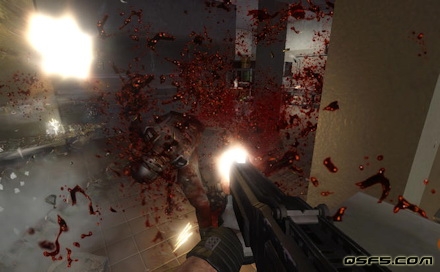 I enjoyed Monolith’s F.E.A.R. on the PC. I enjoyed it so much that I even played through those non-Monolith expansions that people refuse to recognize as canon. F.E.A.R.‘s excellent artificial intelligence and satisfying gun play made for a memorable first person shooter. Its horror and scare tactics spiced things up, but at its core was a solid game which could stand on its own regardless of the dressing around it. When I heard the folks at Monolith were creating a sequel, I was intrigued. And when the demo hit the PlayStation Network, I was excited to take it for a test drive.

The demo offered a generous amount of content for the curious. The standard gambit of weaponry (including SMGS, assault rifles and rocket launchers) showed off what kind of firepower F.E.A.R. 2 had to offer while a surprising amount unsettling moments gave a sneak peak of what kind of scares we could expect. I found both offerings very familiar. They’ve also included a small segment with a mech suit which was amusing, but not something I would dedicate an entire video for.

What I didn’t particularly enjoy were the controls and technical shortcomings. It’s one thing to lock button assignments in place, but to lock them in the uncomfortable “L2/R2 triggers for aiming/shooting” configuration? That’s just annoying and uncomfortable. Monolith produced a great looking game, but I wished they didn’t do it at the expense of a consistent framerate. I’m not sure why, but something about the way the game handles movement coupled with the erratic framerate makes me queasy. I had the same problem with their Condemned games and their technical issues as well.

If the demo was meant to demonstrate the enemy intelligence, I didn’t notice it. There weren’t enough encounters to get a real impression of how they’d react. I find it hard to believe that it would be a step down, but we won’t be able to pass judgment on that until the final game debuts on February 10th, 2009.

As a fan of F.E.A.R., I cannot help, but feel an affinity for the sequel. The technical issues of the PlayStation 3 version is a deal breaker for me, however I’m not ruling the game out completely. While I cannot justify picking this title up in a surprisingly jam packed February, I may just explore the Xbox 360 or PC versions in the future.