The era of Electronic Arts and new original intellectual properties has returned. This past holiday season we witnessed two new franchises sprout from two of EA’s most talented teams: Mirror’s Edge from DICE and Dead Space from EA Redwood Shores. Admittedly, I was amongst the skeptics when I first laid eyes on this sci-fi horror title; it reeked of Doom 3 and its derelict setting. I discarded those prejudicedes, gave Dead Space the benefit of the doubt and I was handsomely rewarded for it.

The USG Ishimura was a deceptively captivating setting. At first glance, it seemed to be nothing more than your typical sci-fi spaceship. Then I noticed the scribbling on the walls, the way blood was smeared across it and how certain doors and pathways were barricaded in futile attempts to prevent something horrific from entering. The game’s narrative was all around and I was pleased to discover that the developers didn’t simply rely on audio and text logs to convey it. It was atmospheric. 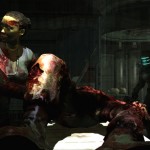 I wouldn’t describe Dead Space as a scary game – I’d call it creepy. It was also a very tense game which prodded my mind to wander and conjure up terrible things which rarely manifested. Cheap scares were used sparingly, but the teasing of monsters in the shadows and the reminder of something rattling through the ventilation system above me was enough to keep my finger on the trigger. The psychological games were enough to bring into question not only the sanity of my own character, but the sanity of others. How could I forget the demented doctors operating on live gagged patients? Or the crewmen who seemed to believe that the best way to deal with a headache was to pound their heads until it split open?

Why was I on this Ishimura space ship? Simple. As Isaac, an engineer of some sort, I was a member of a small party tasked with rendezvousing with the distressed USG Ishimura. Things quickly degraded from an investigation mission into a fight for survival where Isaac and two other survivors have to combat conspiracy, religious fanaticism and a biological terror. These ‘Necromorphs’ infected the ship, transforming the deceased into biological beasts who apparently despise anything that breathes. Worse, these creatures could not simply be shot to death; their limbs must be “strategically dismembered”.