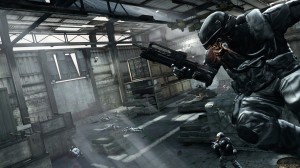 As a person who enjoys things that look pretty, there was little doubt that I wouldn’t be picking up Killzone 2 with or without a demo. In North America, we unfortunate saps would have to pre-order a copy of Killzone 2 at a GameStop or EB Games in order to receive the privilege of trying out the highly anticipated shooter. Thankfully, the Europeans were more sensible than this. Today, a 1.2 gigabyte demo trickled down from the SCEE servers onto my PS3 and after a couple of runs through the demo, I thought I’d share some thoughts.

Let me preface the next few paragraphs with a few things first. This is an earlier build of Killzone 2. It’s not what the review build that other reviewers across the globe have. I’m also quite versed with what Killzone 2 has to offer. Ever since gameplay footage of this beast hit the web, I’ve been consuming KZ2 media content like rice. (I eat a lot of rice.) So I know how good the game looks, how it animates and how it sounds. What I don’t know is how it feels in my hands and how the game reacts to my actions. And this is what these impressions will deal with.

I started the demo by switching the control configuration to ‘Alternate 2’ — the configuration which resembled Call of Duty 4‘s. While manageable, this was an awkward layout due to the heavy use of the cover function within this game; the L2 trigger must be held in order to take cover and crouch. Holding both L1 and L2 buttons at the same time to crouch and shoot is simply impractical. It could work with a ‘crouch toggle’ function and/or the ability to remap buttons, however the folks at Guerilla Games are stubborn folks who don’t plan on offering these options for the single player component.

For my second run through the demo, I reverted to the default configuration and bumped up the sensitivity up by one notch. I was no longer holding L1 to zoom since it was mapped to R3 as a toggled function. With this setup, I was comfortable and functional. That “weight” of the weapons which folks have spoken about was initially jarring. It took me the entire ten minutes or so of the first run before I began to grasp its nuances. I’m confident that by the end of the single player, I’ll be wielding and dealing without too much resistance.

The next piece of the puzzle which I wanted to get into was how the game reacted — specifically the enemy A.I and how satisfying it was to operate the game’s weaponry. The firearms felt solid and provided enough feedback, both visually and aurally, to give me a good sense of power. As for the enemy A.I., it was the most surprising. I was pleased to see the Helghast move from cover to cover in an effort to flank me. I was impressed with how they negotiated cover and attacking; when I’m up and firing they stop to hide, but when I’m reloading, they move. It wasn’t perfect as some of them moved from solid cover to wooden boxes or tables with penetrable materials on it, but considering it was the second lowest difficulty level — I was amazed.

It was a short demo, but with my preorder in place, my mind was already made up long ago. I didn’t need the demo and thus I wasn’t disappointed by its lack of quantity. I was satisfied with what I tasted and look forward to its release later this month. However, before I finish this up, there has to be some flaw right? Some significant piece of Killzone 2 which I have to ‘hate’ on in order to attract readers to click my blog and flood my comments with bile. Well, there was one: the awful decision to have the menu interface shake and pulsate with every move. What were they thinking?