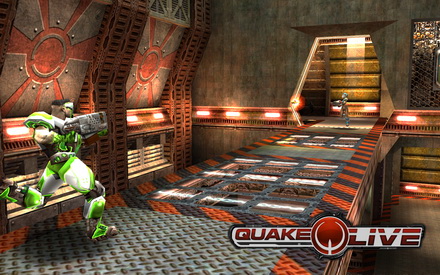 Quake Live is essentially a revised version of Quake III built for the web browser. The idea behind this free to play first person shooter is to provide a quick to pick up and play game which gamers could access via a web browser. I signed up for the beta a few months ago and was recently accepted. While it sounds great on paper, there are some caveats worth noting.

First of all, not all web browsers are supported at this time. You have to use either Internet Explorer or Firefox. Second, you have to install a small program which eliminates the possibility of playing Quake Live from a locked down workstation. I mistook id Software’s intentions as a Macromedia Flash effort. I initially thought they were going to produce a mind blowing 3D Flash engine. I was wrong. Their current implementation is undeniably impressive, but it’s a bit of a fallacy when you have to install additional non-standard addons to get the game up and running.

As for the game itself, I guess it’s the Quake III: Arena which folks played and loved. I never played the game for more than a few short bursts at a time, but from what I can tell: it’s Quake III: Arena. The classic weapons are all there and so is that demanding twitch gameplay. The game runs fine on my desktop, but my tiny Dell Mini 9 with its 1.6 GHz Intel Atom processor and GMA950 can’t muster enough power to provide a consistent framerate at even the lowest of settings. I presume they’re taxing the processor a lot more than the original Quake III engine.

Surrounding the old game are some modern frills and benefits. There was a brief tutorial and initial ranking match to test my skills and match me up with similarly skilled players. When I got into a match with some live players, I found the competition to be challenging, but not overwhelming; a product of a job well done by the matchmaking. Other niceties include being able to map keys and tinker with settings and have it saved online. So when I do find the need to play Quake Live on another computer, I’ll be ready to go after the initial install.

I appreciate id Software’s efforts with Quake Live, but despite its free status, I doubt I’ll be spending time with it. It’s Quake III: Arena and I’m just not a big fan of it. I guess you could say I’m more of an Unreal Tournament type of guy. I am still keeping an eye on their progress though. What id Software is doing with the free games space is definitely commendable. If they somehow squeezed Return to Castle Wolfenstein’s multiplayer into the browser space: I will be all over it.

For more information on Quake Live, visit the official website.