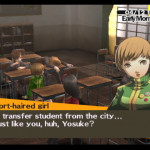 Once again, I played the silent protagonist who I aptly named after myself. Mycharacter’s parents were overseas and he was sent to live with his uncle for a year in the fictional rural town of Inaba. It’s a stereotypical clean slate approach which I’ve come to accept. As a student of Yasogami High School, my character quickly befriended fellow city dweller, Yosuke Hanamura, and two Inaba natives, Chie Satonaka and Yukiko Amagi.

This band of impromptu detectives quickly found themselves jumping through TVs and saving the victims of a serial killer/kidnapper. The criminal’s modus operandi was bizarre. He abducted individuals who appeared on the mysterious ‘Midnight Channel’ and tossed them into the ‘TV world’ where they would face their other selves and other unworldly beings known as Shadows. It was up to us to enter this dangerous world, save these people and put a stop to these attempted killings. We did all of this while going to school and living their day-to-day lives. It certainly makes my real life seem dull by comparison.

Abiding by a schedule may sound strange to those unfamiliar with the series, so Persona 4 implemented this without the hassle of time sensitive quests or expiring deals. It was far more lenient with plenty of breathing room to operate in. I could enter the TV world right after school and spend my nights studying for school or work part-time for some spending money. The newly added weather system inconvenienced me from time to time, but I can hardly blame the NPCs for not wanting to roam the streets when it’s pouring out. 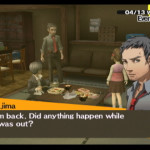 The murder mystery plot was a refreshing approach to the “stop to the evil menace” story arch so many RPGs rely on. Persona 4‘s angle was more grounded to reality; police involvement was prominent and the denizens were more cognoscente of the growing murder problem. And it wasn’t just the story which was meshing better with the game world. The dungeons of the TV World were no longer stale randomly generated hallways like the ones found in the Tower of Tartarus from Persona 3. Instead, they were thematically relevant to the kidnapped victims; they reflected their inner most thoughts and feelings. 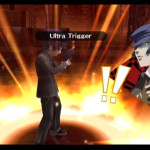 While some characters harbored thoughts of jealousy, envy and even dark hatred for others, a couple of them delved into the realm of sexual confusion. These characters in question struggled to find answers and direction for themselves. The game did not pursue it towards any extreme — they left the characters accepting of their ambiguous situation and showed signs of them debating with notion throughout the rest of the game. These tidbits of character development were dropped throughout which kept them interesting and relevant to me. Needless to say, it was an intriguing bunch of teenagers. Oh and it was also nice to see that not every female character wanted to “share a special moment” with the protagonist.

The relationship development and combat progression halves of Persona 4 intertwined in a much more natural fashion. Like before strengthening relationships contributed to the development of Personas, but this time it also provided added niceties such as character specific enemy knock down moves and the ability to endure life threatening blows for me. Vice versa, certain battles improved my own character’s courage which enabled him to take on different quests. 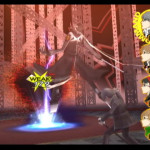 With the ability to control the flow of battle directly, the weaknesses of the friendly A.I. never manifested itself. In fact, a lot of Persona 3‘s faults were rectified through the omission and addition of a few select options. The tedium of grinding was toned down considerably since I was given manageable ten storey dungeons. Boss battles were preceded by considerate save points and I could leave and reenter dungeons on my own terms; it was pure progress and I loved the minimal fuss approach.

Atlus continued to provide the PlayStation 2 with eye pleasing titles. I’m not expecting bump mapping, high dynamic range or even crystal clear picture and neither was Atlus. They’ve improved graphics engine and continued to focus on delivering stylized visuals without compromising performance. They even managed to elevate their audio work through remarkable voiceover performances and catchy music choices. I still can’t make sense of the lyrics, but those songs have the amazing ability of not becoming annoying.

The PlayStation 2’s prime years are behind it, but that doesn’t mean there aren’t games worthy of your attention still being released. Atlus gave North America Persona 4 late last year and while other role playing games such as Fallout 3 and Fable II may have garnered much of the limelight, Persona 4 flew under the radar with its payload of quality entertainment. It was a game which felt more alive and intricate than those that preceded it. Few games offer the types of characters that you can relate and genuinely empathize with. Wrapped with a refined battle system and chic presentation, there’s just very few reasons why you wouldn’t want to play Persona 4.

For more information on Atlus’ Persona 4, visit the official website.