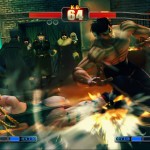 I found the Focus Attack mechanic to be a brilliant addition since anyone could pull it off without the ability to count animation frames. The newly added mechanic provides an easy to execute double edged sword. I could absorb exactly one hit from an attack and retaliate with a hard hitting move which will send my opponent into a crumpled state – leaving them open for additional punishment. However, if I am not careful, it leaves me wide open to unpleasant surprises as well since it does only absorb one hit. That’s just the tip of the iceberg though; advanced players can delve deeper into the advance mechanics of the Focus Attack and tap into dash cancels and all that jazz.

While as good as Street Fighter IV’s fighting engine is, it still has a few niggling issues. Primarily throw hit boxes. Kara-throws are still intact, but that’s not what I’m referring to since it’s a high level technique. Certain characters like Zangief still exhibit the invisible throw range where it may seem like you’re a safe distance away from an opponent, but you’re really not. It’s not as bad as something like this, but it’s still bothers me. For a game which so much consistency in move prediction and fluidity, I would have liked to have seen this rectified.

Given the precedent set by Super Street Fighter II Turbo: HD Remix, I’m not surprised that some found Street Fighter IV’s online offerings to be lacking. The fundamentals are sound; matches were silky smooth when I was paired with an opponent with four out of the five available network bars. I could honestly say that this game works even better than the high definition remake. Unfortunately, this is all that Street Fighter IV gets right. There is no lobby system; only one on one rooms. Sifting through players for a suitable combatant could take anywhere from ten seconds to a minute. This may not sound so bad, you have to remember that a Ranked match could last less than thirty seconds. Thankfully, there is the superior Player Match which allows for rematches. 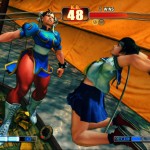 My next complaint isn’t exclusive to Street Fighter IV, but I thought I should bring it up anyway. Any serious fighting game should not have character unlocks. Lock away costume colors, stages (however few it may be), taunts and even the last boss, but don’t force us to go through your song and dance just to get our hands on core game elements. Instead of spending time sparring with one another, friends and I spent two hours jumping through hoops so we can play as Sakura, Dan and the rest of the locked up crew. Please, no more of this nonsense in the future.

Street Fighter II still manages to stay in the collective consciousness of the masses. While only time will tell if Street Fighter IV will be revered like its predecessor, it’s encouraging to see Capcom has taken the time and care to craft such a magnificent fighter. As important as it was to forge a worthy successor to Street Fighter II, it was paramount for Capcom to bring Street Fighter online. It may not be as friendly or snappy to get into, but what we got is an excellent start. With the promise of downloadable updates, Capcom could rectify many of the mentioned issues and truly bring the Street Fighter franchise into the online arena. Even if you are not the most avid Street Fighter fan, you owe it to yourself to play this game. It’s just too good not to.