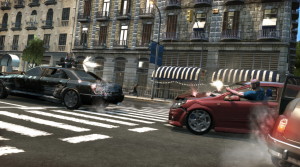 Here’s part one of my “Gaming with Vin Diesel Weekend”. This week’s PlayStation Store update brought two game demos starring Vin Diesel: The Chronicles of Riddick: Assault on Dark Athena and Tigon Studio’s The Wheelman. This little preview is about the latter.

The Wheelman’s premise was intriguing, promising to be action packed and empowering. Quality wise, I really had no idea what to expect from The Wheelman. The skeptic within me was doubting its technical merits, while the optimist was hoping it would look just as nice as the screenshot above.

The Unreal Engine 3.0 logo was a bad omen. While folks like D.I.C.E., 2K Boston and Epic Games can wring out jaw dropping visuals for their games, not everyone has that kind of talent. The Wheelman isn’t going to win many over with the quality of its visuals. On the bright side, racing and wreaking havoc around the city of Barcelona remained fluid and smooth throughout my time with the demo.

As The Wheelman, not only was I able to ram into vehicles with the flick of the right analog stick, but I was also able to pull off ridiculous hand brake turns and 180 degree turns with the ease. And if I was reckless enough, I was rewarded with Focus Power which enabled even more over-the-top slow motion bad assery. None of this was particularly realistic, but who cares? The driving felt right for an action game. The on foot movement? It felt a bit off.

The demo was surprisingly hefty with three types of missions including a getaway , a car retrieval and, of course, a race type. The most surprising mission was car retrieval. The objective was clear: find three marked cars and return them to a specified location within the set time. I didn’t think much of it until the tutorial tip popped up introducing something called “Air Jacking”. Pulling off the Air Jack enabled Vin Diesel to leap from his own car and into another one – all while both cars are still moving. Bad ass! It turns out you can even Air Jack in races, hopping from car to car as faster ones present themselves.

By the end of the demo, I was left with mixed impressions. On one hand, I see a game sprinkled with fun ideas. On the other, I see a game, which could use a few more months tightening the presentation, asking for $69.99 CAD. And as awesome and booming Vin Diesel’s voice is in this game, it simply isn’t enough to sway me towards a full price purchase.

The Wheelman debuts March 24th, 2009 on the PlayStation 3, Xbox 360 and PC. For more information, visit the official website.