What the deuce? Aren’t these FYI posts usually posted on Tuesdays? I bet you didn’t even notice they were missing. Not much happened yesterday, but today is April 1st and there will be plenty of crap to post about.

Apparently, Jak & Daxter are returning to the PSP and PS2. The PS2 is no stranger to PSP ports, so I guess it’s not that surprising that it’ll be receiving a new first party title this late in its life cycle. Expect the title to debut in autumn of 2009. 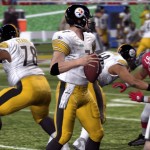 I don’t usually post screenshots from Madden games, but this first screenshot from Madden NFL 10 was surprising. They chose to release this? A 1080p screenshot of a 720p game with blurry textures and aliasing? April Fools? Wii edition? You decide.

Not much of a fan of Jak or Daxter. The PSP title was alright.