Capcom’s worst kept secret is no longer a secret! Marvel vs Capcom 2 is coming to Xbox Live! Arcade and PlayStation Network this Summer!

Here’s a summation of what’s in store for this digitally distributed classic:

Oh, and there will be an exclusive demo coming to PlayStation Network this week! Glee! But, what is up Capcom and their exclusive demos?

With this coming it’s not a stretch to believe Capcom is developing Marvel vs Capcom 3 using either the Tatsunoko vs Capcom engine or the Street Fighter IV engine (the former being the most obvious choice). They’ve gone through the trouble of reacquiring the Capcom license, why simply use it to rerelease a nine year old game? 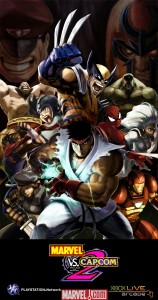