Video of the Day

Some notes (from GAF) of this exciting piece of footage.

Fallout 3 DLC for PS3 should be exciting at least one person I know. As for me? I don’t even own a copy of the game anymore.

Shadow of the Colossus is one of the most unique games I’ve ever played. I may not remember every single detail, but thinking back always brings back a pleasant feeling. This Trico footage hits the right notes. I hope they show something this year at E3!

Shin Megami Tensei: Devil Summoner 2: Raidou Kuzunoha vs. King Abaddon came in today. Even though I knew exactly what I was ordering, I was still pleasantly surprised. 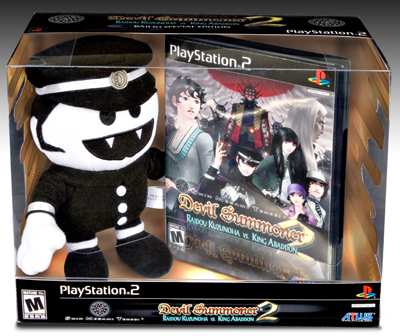 For $40.67  CAD, I get this nicely packaged PlayStation 2 game. Forget the fact that the pre-order bonus item is a plushie of Raiho. Focus on the notion of a PlayStation 2 Japanese role playing game receiving this kind of treatment in 2009. And without charging an exorbitant price tag. I’ve seen PlayStation 3 and Xbox 360 games with shittier Collector Edition offerings. Atlus knows how to treat its fans.