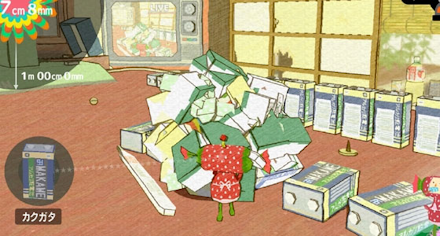 It’s been awhile since I’ve written one of these demo impression things. There simply hasn’t been any worthwhile demos to speak of and that’s still the case for the North American PlayStation Store. Then about of the blue, a Tweet from @PSNStore announced the arrival of a Katamari: Forever demo on the Japansese store. I had to try it. I had to know if it was a real advancement for the series or an entry like Beautiful Katamari.

In many ways Beautiful Katamari felt like an upscaled PlayStation 2 iteration of Katamari. Along with the awful price tag and trying to pass on-disc content as additional downloadable content, Namco managed to turn Katamari into something I didn’t want. The Katamari: Forever demo is different. It looks like like a game which takes advantage of these high definition consoles and, above all else, it looks like a genuine amount of effort was put into it.

This demo offers two levels: one classic and one with a slight twist to the classic formula. I wasn’t fond of the “new twist”. Using a water soaked Katamari sponge to rid the world of dirt is dandy and all, but having to return to the pool of water to absorb more water quickly becomes a chore. I give them credit for trying new things, but I hope the final version doesn’t build on ideas of this nature. They’ve also given the Prince the ability to jump with the shake of the controller or a press of the R2 button. I felt it was a no-brainer addition and one that would liven up the game even more.

The music and presentation is just as wacky as I’ve come to expect from a Katamari game. The King is still there with his tights and I’m sure he’s still spewing nonsensical gibberish (I can’t confirm it because all of the text in the demo was in Japanese). The new pencil colored art style suited the game very well. It was such a natural fit that I had almost forgotten that this wasn’t how a games looked in year’s past. If you’re wondering if this game runs at a buttery smooth 60 FPS, it doesn’t. There were microscopic amounts of slowdown in select spots.

If you’re a Katamari fan who’s looking for more quality Katamari time, Katamari: Forever seems like it will fill that void just fine. I enjoyed the demo and was planning on downloading it from the PlayStation Network Store. Then I remembered that I most likely wouldn’t be able to. Namco is releasing this on disc in Japan and it will most likely be on disc for North America as well. Add a $49.99 USD price tag to that and I’m weary of the prospect of a day one purchase. It’s a shame really.

Katamari: Forever debuts on September 22, 2009 exclusively on the PlayStation 3.