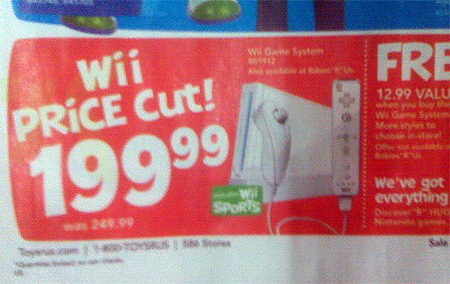 A Toys R Us ad from the United States seems to be pointing towards that.

If the ad (pictured above) is to be believed (which at this point, I don’t see why not), the Wii will be getting a $50 USD price cut which brings the MSRP down to $199.99 USD. As for the target date of this price cut? Around the last week of September/first week of October.

The question I have is, what will that mean for Canadians?

At the moment, the Canadian MSRP sits at $279.99 CAD. When (not if) we receive a price cut in Canada, will we reach parity with U.S? Sony priced their console at $199.99 for both countries, will Nintendo follow suit?

I would hope so. Nintendo was kind enough to shave off $20 from the Nintendo DSi price tag, so why not the Wii?