Very few games require a one sitting completion. If you do not have two to three hours to spare, I wouldn’t bother starting thatgamecompany’s Journey. I firmly believe it’s an experience that needs to be completed in one sitting. The emotional ride wouldn’t be complete without the transition from one feeling to the next.

Journey started like flOw and Flower; calm and quiet. There wasn’t much to do but there was a lot to see. It wasn’t a bright field full of flowers and grass though. It was a desert and I spent a fair bit of it watching my avatar’s little feet wade through the sands.

The avatar I was controlling was beautifully designed. It was simple yet expressive enough to convey struggles through the sand and flightlessness through the air.

I knew it was a slow start and if I chose to, I could have let it stay a lonely trek through the desert but I was getting bored, so I began to seek out landmarks. Ruins of a large monuments and structures were strewn throughout the desert but it was all lifeless. Pieces of cloth fluttering in the wind were the most animated objects in the world.

Boredom was creeping in. 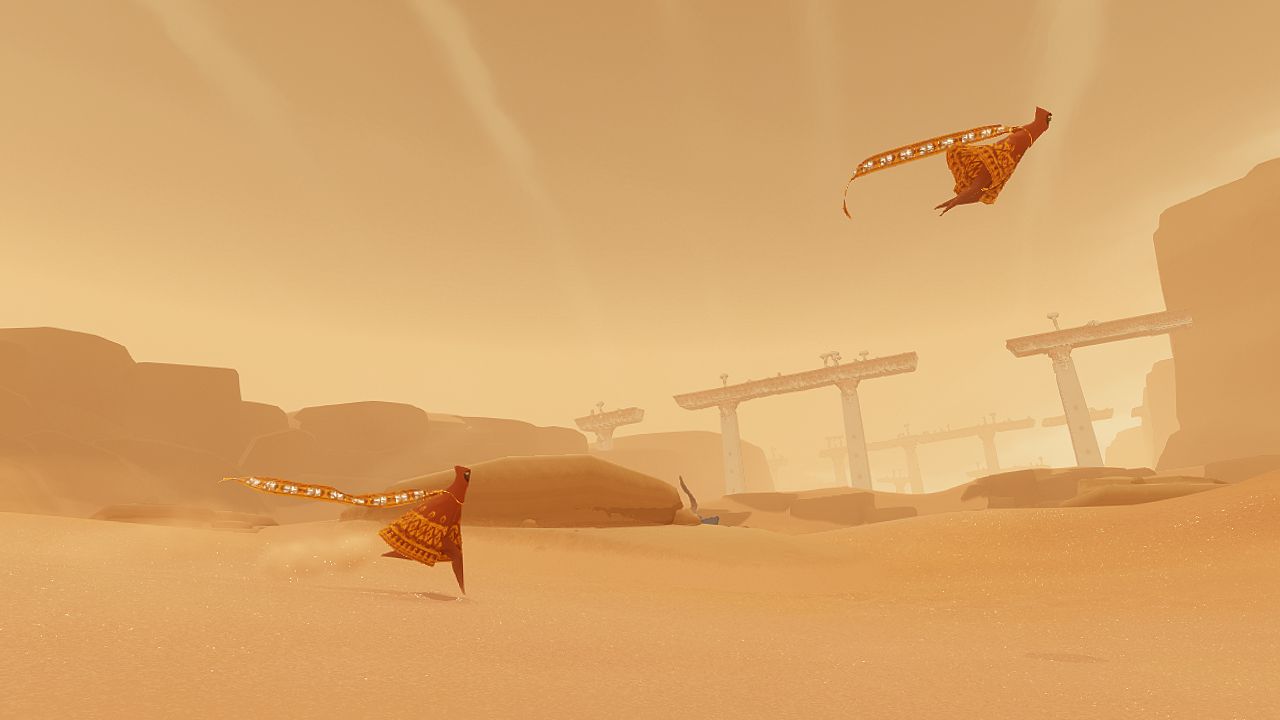 I knew there was a co-op element to Journey but I didn’t think it was integral to the experience. As it turns out, when you’re out in the desert with not a shred of life to be seen anywhere, the sudden appearance of a living being ends up being a very a joyous occasion.

I chirped at the fellow using the only means of communication at my disposal — there was no voice chat option. I wasn’t able to easily identify who I was playing with either. Both of those usual niceties were intentional omissions that added to the experience though.

I’m sure the joy I felt would have been immediately dashed if the person I met had the same usernames and voices as the folk I run into in Call of Duty and Battlefield games.

Journey’s co-op partners were random and as it turns out they can suddenly disappear. The first time my companion disappeared, I was confused. We finished a race down a river of sand together and wrapped up the level. Unfortunately he/she did not appear on the other side of the load. I waited a minute or so before moving on. 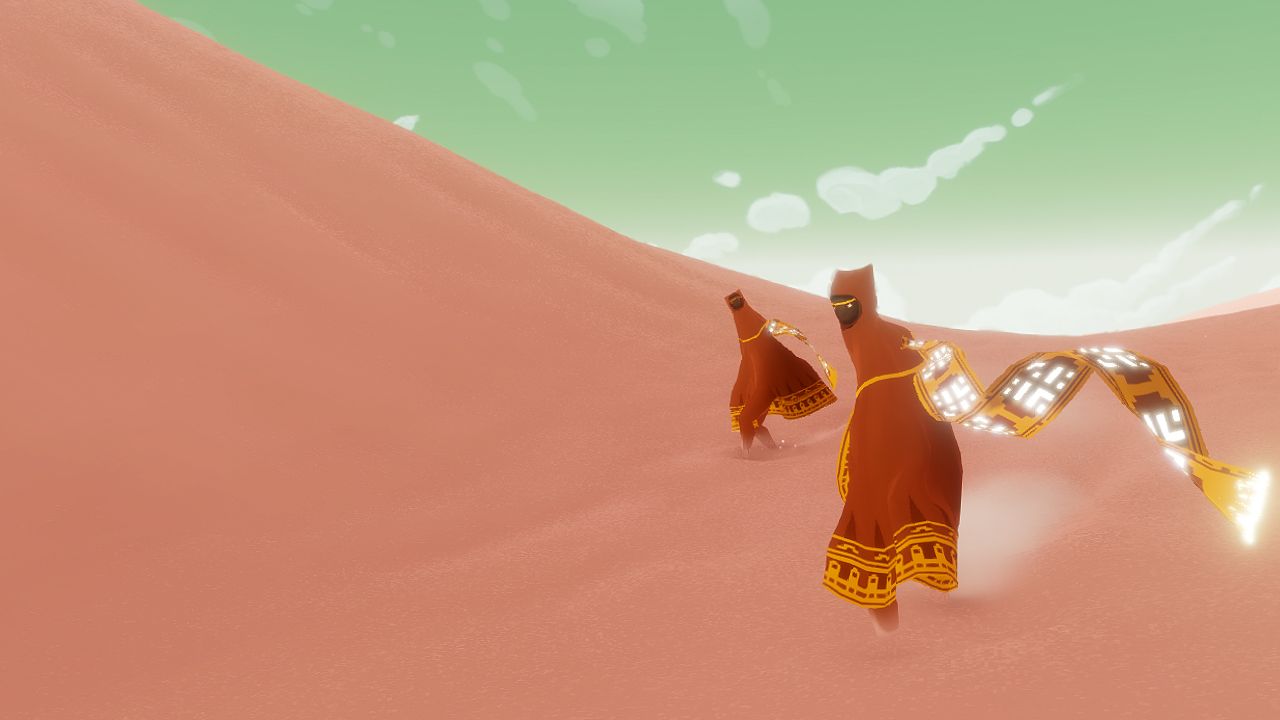 It didn’t take long for the game to drop in another co-op partner but he/she too went their way shortly thereafter. It wasn’t until the third person arrived that I found a companion that lasted more than a level.

There wasn’t anything to discern one co-op partner from another except for the length of their scarves but even that wasn’t enough of a defining characteristic. Despite the lack of options to diversify oneself, players still managed to be unique with their avatar’s mannerisms. Some were very quiet and bee-lined towards the objective, others were helpful and playful. They guided me to hidden collectibles, helped replenish energy and chirped back to my random communiques.

After spending a fair chunk of time with a single helpful partner, a tangible bond developed. I helped that person and they returned the favor. This made farewell after a handful of levels a bit disappointing.

The third companion was eventually replaced by another but they were as cold as the snow we were trudging through. They didn’t help locate secrets and they certainly didn’t wait around when I was being attacked by the giant flying centipede monster. I missed companion number three. 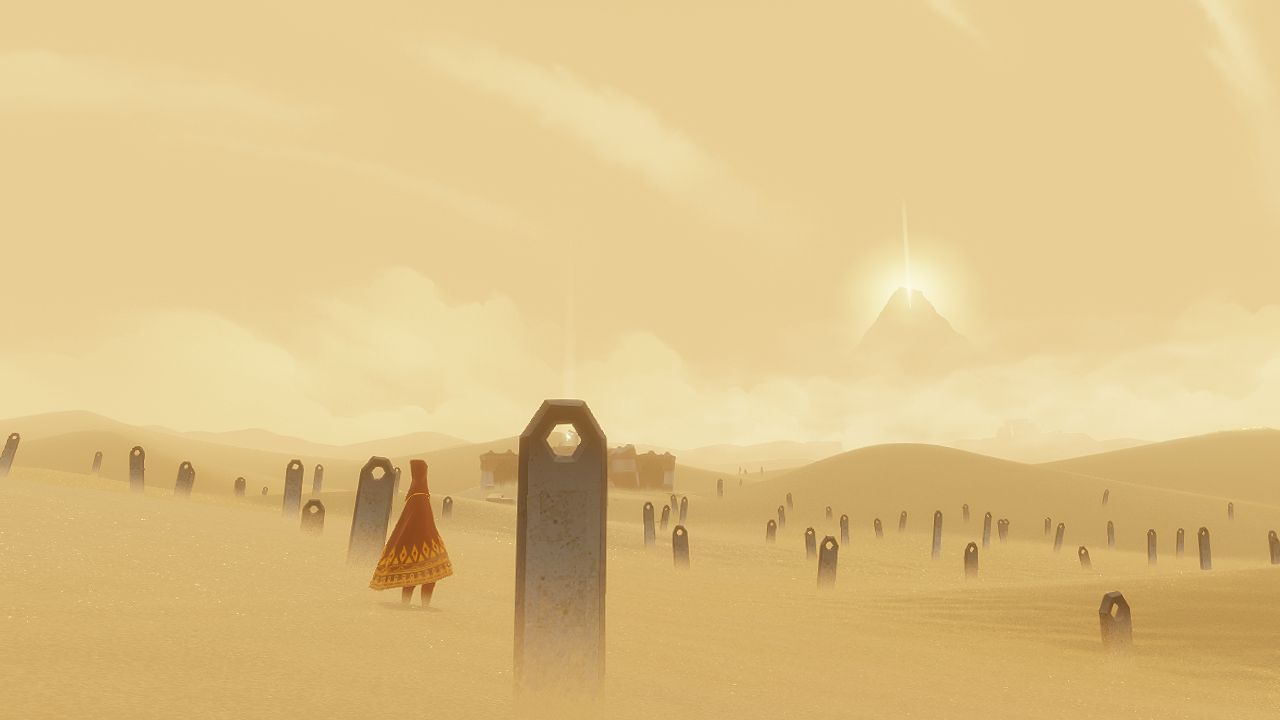 The final chapter of Journey didn’t require a co-op partner to finish. It’s not even difficult to navigate through the heavy winds and flying monsters. However, I wanted someone to be there who didn’t run off ahead as I was tossed around by an angry flying centipede. Surprisingly, I felt a little tinge of anger towards the bastard who ran ahead. I couldn’t even quip at the fourth companion because it was so cold that my little avatar was weakening with every step.

At the end I was wondering if I was going to die because that was the way it was supposed to end or was it because I didn’t have someone by my side.

It was tough to watch my avatar slowly succumb to the cold. In the end though, my avatar’s death was actually foretold and it entered what I can only assume is some sort of “heaven”.

I was relieved by that predetermined outcome. I was pleased that I wasn’t screwed over by that companion who abandoned me and was happy to see my avatar reach nirvana after a tough journey. The final sequence made me wonder if all those graves that I saw in the beginning were populated by other players.

The range of emotions that I went through in such a short amount of time makes Journey a very special game. No other game brought me through that kind of emotional ride. I may experience one or two emotions with most usual games but never a full array of them like with Journey.

Journey worked because it took away the traditional hallmarks of co-operative multiplayer experiences. By removing voice chat and any way to identify who I was playing with, I was more willing to embark on an adventure with them. By removing any meaningful interaction in the beginning, they made first contact with another player more exciting. “Less is more” and I don’t think there’s a game that demonstrates that better than Journey.

For more information on Journey, visit the official website.