It’s time to look back and tally up the cost of gaming in the year that was.

Compared to 2011, 2013 wasn’t a very purchase heavy year. I actually spent under $1000 this year thanks to numerous titles being delayed to 2013 and plenty of gift certificates.

I spent 47% of the MSRP this year. That’s a really good percentage and is currently the lowest amount I’ve had to pay since I started tracking gaming expenses. I am very pleased by this statistic.

Unlike last year, I actually own an iOS device; an iPhone and an iPad. With that in mind, there was a lot more attention paid to the iOS scene.

Let’s get the nils out of the way. I didn’t spend a dime on the PSN store or the Xbox Live! Marketplace. I also didn’t spend any money on the PlayStation Portable/Vita or the Wii. I purchased a Vita but didn’t need to buy any games for it thanks to PlayStation Plus and the freebies that came with it.

The largest portion of my expenses went to new hardware & accessories. The new PlayStation Vita and Nintendo 3DS XL were acquired thanks to some incredible deals. I know some folks will look at that large slice of iOS games and scoff at it because iOS games are a dime a dozen. There are a lot of freebies and cheap games out there but I only add the ones I keep — no throwaway games here.

The PC got more use this year thanks to GreenManGaming, Amazon.com and just about every other digital distributor besides Steam. Thank goodness for competition! Lower prices for all. 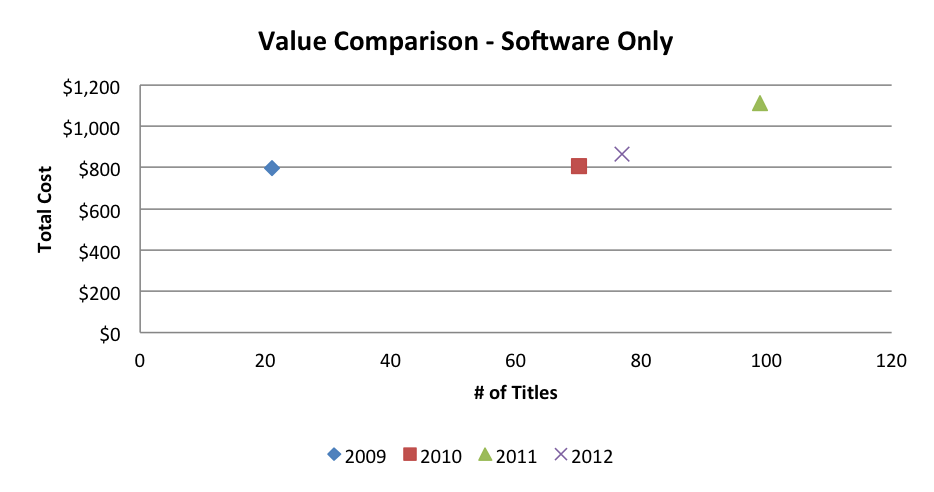 Delaying gratification has been exceptionally easy this year. It’s not just Ubisoft titles that are seeing deep discounts within 3 months — it’s now everyone. Even Nintendo’s titles are seeing 25% off discounts by certain retailers. I see this trend continuing until new console hardware shows up.