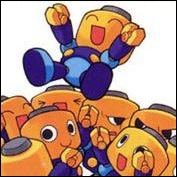 I’ve been wanting a new logo for quite some time now and with the second anniversary of GameDealsCanada just a month away, I thought now would be a good time to begin the search for one. I can’t keep using Capcom’s awesome Servbots no matter how much I adore them. Damn you, copyrights!

So since I’m not much of an artist, I’m throwing a contest to find GameDealsCanada’s Next Top Logo!

END_OF_DOCUMENT_TOKEN_TO_BE_REPLACED

Digital Distribution Deal of the Year

A non-Steam sale for “Digital Distribution Deal of the Year”? Blasphemous? Not quite. Allow me to explain.

Just a little over a month after release and this game gets a hefty $20 off on Direct2Drive. It was a timely sale, there was plenty of time take advantage of it (weekend sale) and it was a deal for a game people wanted. We wouldn’t see a similar deal like this for another 30+ days on Steam. Plus, since this title was a Steamworks game,we were activating it on Valve’s service anyway.

END_OF_DOCUMENT_TOKEN_TO_BE_REPLACED

It’s sorted by platform then by store, then by price (lowest on top) and then alphabetically within each price bracket.

I will be filtering out redundant deals where the cheapest deal will be posted.

Please let me know if there are any missing deals, errors or glitches!

END_OF_DOCUMENT_TOKEN_TO_BE_REPLACED

Black Friday 2010 begins November 26, 2010! And Canadian retailers are getting into the thick of it. Here you will find game deals as I stumble into them. I will try to update this page as soon as possible, but if you want faster updates, follow GameDealsCanada on Twitter or Facebook!

Without further delay, here are the deals sorted by platform!

Bolded deals are my personal highlights.