Time has just flown by for me this year. It’s a consequence of not taking any vacation to just do nothing. But despite the lack of vacation, I’ve been working through some games.

I wrapped up Asura’s Wrath and even played some Geometry Wars 2. That game is still awesome. It would have been fitting to have a Geometry Wars 3 make its debut on the Xbox One. I even managed to unlock an Achievement (Treaty).

While on the Xbox 360, I noticed that I downloaded but never launched Beyond Good & Evil HD. I think it’s time I check that out. I also have Lara Croft & The Guardian of Light to finish as well. After that, I believe my Xbox 360 backlog will only consist of Assassin’s Creed: Revelations.

I’m still working my way through Plants vs Zombies 2 but I haven’t touched Mario & Luigi: Dream Team. Animal Crossing made it’s way back into the 3DS XL and hasn’t left since Monday.

So what do I have left for the summer? I hope to fix up the house during the next long weekend. I was hoping to do some furniture shopping as well but I just haven’t found the motivation to spend big cash on that stuff. But I ought to if I want this place to appear like a real home.

Update: Looks like it was a typo. Thanks Manuel.

There I was, downloading a copy of the newly released remix track from Bizarre Creation’s website, when I decided to check out what else Mr. Chris Chudley worked on. 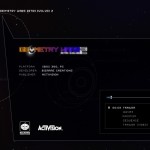 Is this a typo? Or does this mean the sequel will be joining its predecessor on Steam?

It’s thirteen minutes of Geometry War: Retro Evolved 2’s awesome soundtrack remixed by a fellow named “Chris Chudley” (who did a lot of work in Bizarre Creation’s other works as well). The mix is called “46860 Choices” and was made publicly available from the fine folks at Bizarre Creations.

I absolutely enjoyed the hell out of this remix.