Look at all these trailers. It was like there was a fighting game tournament over the weekend and all these developers decided it was a good time to release more media on upcoming fighters.

EVO 2014 happened but I didn’t watch much of it. I didn’t even bother with the Ultra Street Fighter IV final. I did, however, catch the trailers that were revealed starting with the confirmation of Raiden in Mortal Kombat X.

The Tekken 7 teaser was a big letdown for me. Rumors of Namco Bandai using Unreal Engine 4 piqued my interest and was looking forward to seeing how the latest rendition of Kazuya Mishima looks like.

It’s obvious that Fire Emblem: Awakening made a big splash for Nintendo. Lucina, Robin (both male & female versions) and Chrom were confirmed for Smash Bros. I guess it was tough for Nintendo to choose just one representative from that game.

END_OF_DOCUMENT_TOKEN_TO_BE_REPLACED

As E3 properly gets under way, we’re beginning to find out more information on the games themselves.

I loved Mortal Kombat 9 for its innovative spin on fighting game campaigns and I look forward to seeing what Ed Boon and Netherrealm Studios has been up to with regards to their story lines. They’ve already revealed that Johnny Cage and Sonya Blade have a daughter, Cassie Cage. Then there’s this insect human hybrid being, what’s the story with her? And of course, who will be the main villain this go around? Is it Shinnok and his silly hat?

END_OF_DOCUMENT_TOKEN_TO_BE_REPLACED

I started watching the SaltyBet after watching last week’s GiantBomb’s Unprofessional Friday. NeoGAF was all over it for about a week now but I didn’t get around to hitting the site. The important thing is that I’m now watching this ridiculous stream and enjoying it.

SaltyBet is powered by M.U.G.E.N. fighting game engine. They just loaded a bunch of characters, stages and wrapped it around this simple but effective betting system. It’s automated, runs 24/7 and is accompanied by lots of video game or video game inspired music.

END_OF_DOCUMENT_TOKEN_TO_BE_REPLACED

Day two of three has arrived and it answers this important question:

Well read on, friend. The answer awaits you!

Most Disappointing Game of 2011 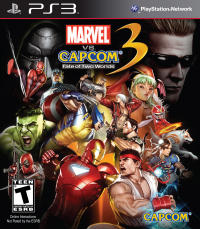 Capcom vs SNK 2 is my favorite of the VS series of Capcom fighting games. I never appreciated any of the other VS games like it. The original Marvel vs Capcom was close though.

I thought Marvel vs Capcom 3 was going to be less frantic than it ended up being and I was hoping there was going to be more effort put forth in the other modes surrounding it — like in Super Street Fighter IV or Mortal Kombat.

I also couldn’t believe Capcom would release a revision of the game at $39.99 in the same calendar year. That move alone sours me on Capcom fighting games in the foreseeable future. Sorry, Street Fighter X Tekken.