The Samsung SSD 850 Pro a new king of solid state drives for the 6Gbps SATA interface. It will cost ~$130 for the 128GB model which is a ridiculous price compared to the 256GB Crucial MX100 that I picked up for $110. The Crucial MX100 isn’t a complete slouch either.

I didn’t know there was a growing concern over interference with shrinking NAND. I’ll quote the AnandTech review:

The above can be fairly tough to digest, so let’s do a simple analogy that everyone should be able to understand. Imagine that you have a bunch of speakers with each playing a different song. When these speakers are relatively large and far away from each other, it is easy to properly hear the song that the speaker closest to you is playing. Now, what happens if you bring the other speakers closer to the speaker you are listening? The other speakers will interfere and it becomes harder to tell your song apart from the others. If you turn down the volume or switch to smaller speakers with lower output volume, it becomes even harder to distinquish your song from the songs that the other songs that other speakers are playing. If you repeat this enough times, there will be a point when you are hearing your song as unclearly as the other songs.

The effect is essentially the same with NAND scaling. When the cells, or speakers in the analogy, move closer to each other, the amount of interference increases, making it harder to sense the cell or listen to the speaker. At the same time the size of the cell (or speakers) is shrunk, which further complicates the focus on one cell (or speaker).

So instead of trying to place speakers closer and closer together on the X and Y axis, Samsung (and others) have begun stacking NAND along the Z axis as well. Now SSD manufacturers will continue to pack more and more storage in the same space constraints.

This whole 3D NAND thing reminds me of the time when Seagate introduced Perpendicular Recording Technology back in 2006. It gave us more GBs in the same space for a cheaper prices. 3D NAND will yield the same results as soon as other competitors like Crucial get on board.

I recall the controversy over NVIDIA cheating in 3DMark. I remember the internet rage and how much crud was flung over NVIDIA’s GeForce FX because of these kinds of antics. Now with Samsung (and potentially others) caught pulling off these kinds of stunts in smartphones, I’m left wondering if we’ll see something similar.

It’s actually been a couple of days since the AnandTech posted their investigation and not much buzz surrounded it. What happened? We stopped caring about just one benchmark. GL Benchmark — and most theoretical benchmarks for that matter — lost relevancy after the NVIDIA and 3DMark controversy. Reviewers and users stopped giving these theoretical benchmarks weight. It’s about user performance and real world testing.

These kinds of shady optimizations should not be condoned though. They still muddy reviews and Samsung and the likes should be called out for it.

Well isn’t this a bit of a coincidence. The guys at Tested.com are building what is essentially my next PC. They’ve recorded an instructional “How-to” video of them assembling it and since I’m waiting for CentOS to install, I’ve decided to give it a watch.

My system isn’t going to be as hardcore or high grade as theirs. It’s not going to sport a Core i7, or a Geforce Titan or a $155 Seasonic PSU despite how awesome it looks. Here’s a spec sheet for a PC if I were building it today:

It’s not too expensive but like I said I’m not planning to build it now. I am planning to build a new PC for Intel’s upcoming Haswell CPUs which should arrive sometime this summer. I miss getting my hands on new hardware so I’m looking forward to that build very much. 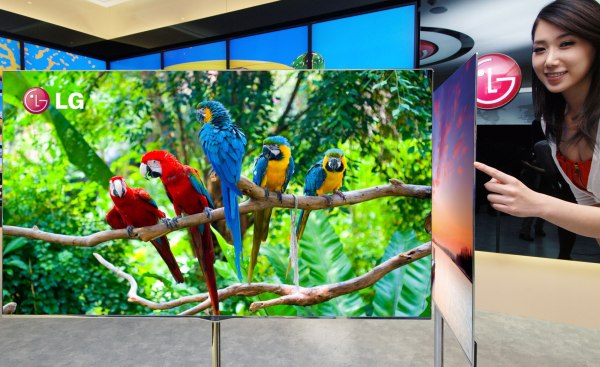 That’s a lot of screen.

I used to think highly of Sony’s LCD HDTVs, but I’ve since given up on the failing conglomerate’s screens and hopped onboard the LG train. LG makes great screens. I really like 55LE8500 I picked up last year and unless LG starts stinking it up with their screens, I’ll continue to keep them in the running.

So it shouldn’t be much of surprise to know that I’m very much looking forward to LG’s 55″ OLED effort. The styling is elegant with its 1 mm bezel and that “Magic Remote” with its motion controls, built-in mic and trackball would make me pause for a second and rethink my Logitech Harmony strategy.

Samsung also announced their own 55″ OLED screen, but like LG they have yet to announce pricing. If you’re waiting for Sony, you may be waiting awhile as they’ve pulled out of the consumer OLED game.