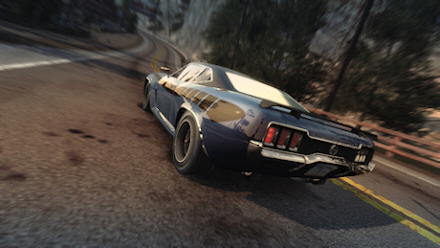 I never purchased a Burnout game, but I have always enjoyed the little time I spent with them over the years. Like fans of the series, the fun of wrecking your car in rush hour in a spectacular display of twisted metal, broken glass and exploding sparks struck a cord with me. Unlike true fans of the series, Burnout games were never more than a few sessions of thrills for me. With the release of Criterion’s Burnout: Paradise demo on the PSN and XBL today, I was curious to see if this installment was worthy of a full price purchase.

After spending an hour or so with demo, the answer short answer is: no. Long answer? Read on.

Burnout: Paradise’s lead platform is the PLAYSTATION 3 and it shows. The visuals are slick with no hint of slow downs during my hour of havoc wreaking. Anti-aliasing was used effectively to keep most of the jagged edges dull and smooth. Burnout: Paradise reminded me a lot of Call of Duty 4 and how the game’s visuals as a whole coupled with the wonderful 60 FPS account for the entire “picture” and not its individual components. Fortunately for Burnout, scenery is second to their glorified crashes. Best car wrecks to date? Most definitely. Still, I wish it was a real Ferrari Enzo being totalled. Perhaps one day…

After getting over the visuals, I took the time to launch one of the events laid out on the map. The closest event, was a typical point-to-point race against time. I expected to win or at least come close, however that was not the case at all. I lost because I got lost. Criterion and EA are pimping Burnout: Paradise as an open world free roaming experience similar to what last year’s Test Drive: Unlimited was. Exploration and knowledge of Paradise City’s roads, shortcuts and other secrets are the keys to success and without any of that you will lose in nearly all events like I did.

Losing in the Burnout: Paradise demo is a pain due to the lack of restarts. When you lose an event, you are left where you are and have to drive all the way back to the event’s start point or find another event point nearby. The demo limited the number of events on the map, so when I lost an event, the closest one was inconveniently several kilometers further away. There was no way to warp to these event points in the demo, but I sincerely hope that players are able to warp to unlocked portions of the map in the retail game.

I tried the online portion of the demo and it worked as advertised. Pressing the d-pad right a few times and I was instantly dropped into a game with three other Burnout players. Through the half-dozen games I was in, events were never started. We just stuck to topping air time and oncoming traffic records set by one another. When we did meet each other on the streets, “Takedowns” and head to head showdowns were mandatory and welcomed.

Well, that was my long answer. Burnout: Paradise will obviously have its fans, but, for me, it was not the instant action crash-fest I thought it would be. Where the other Burnout games felt like a large collection of condensed morsels of fun, Burnout: Paradise appears to be a handful of fun being watered down and spread out for its own detriment. Was it just a bad demo? Fundamentally flawed? I am not sure, all I know is that it is being passed up by yours truly.

P.S – Thanks to EA and Criterion Games for the screenshot of the car used in the demo.