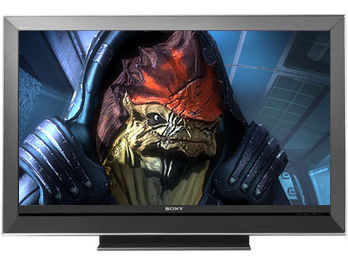 That’s right folks. Getting my hands on a new 52″ Sony KDL-52W3000. The house is being rejiggered and the creation of a true living room and “home theatre” room results in a second HDTV. Why not Samsung? I was checking out prices via BestBuy and FutureShop, but the Sony LCD I had my eye on was on sale and cheaper than comparable models from other manufacturers. I look forward to its arrival so I could get in there and tinker with it. I am sure it will be superior to my KDS-50A2000, but I am curious as to how much better.

Anyone catch the new Blizzard podcast, BlizzCast? It’s not bad for a first try. Half the podcast was World of Warcraft talk and I didn’t care for it. I believe they were talking about the upcoming 2.4 patch.

This week’s Kojima Production Report podcast was chalk full of good news regarding Metal Gear Solid 4. MGS4 is in bug testing! No more delays. Oh and, former Ziff Davis employee, Mark MacDonald was co-hosting as well. The Brodeo (GFW Radio) was rather deep with GOTY discussion as the gents shared their “honorable mentions” for GOTY. Good stuff.

I skipped EGM Live! since it was pretty much the worst episode ever. 1UP Show was a no show since the new season starts on the 18th of January. 1UP Yours should be appearing anytime now.

Bleach returns as Dattebayo lifted their halt of subbing. I got my hands on the The Simpsons Movie on Blu-ray, so I believe I will watch it this weekend. Odin Sphere will get more attention as well. Tomb Raider: Anniversary will be touched. Maybe.

God damn these Blu-ray deals. I just bought Ice Age and National Geographic: Relentless Enemies. (Documentaries are awesome in HD.) That Spider-man Trilogy for $44 is so tempting despite the trilogy becoming progressively worse as it went along. I guess I could also pick up The Prestige.

I finished Mass Effect last night and while I am still writing the review, I will part with this: “over-rated and over-hyped”.

That’s about it. I may start fixing up the basement in preparation for the HDTV moves.