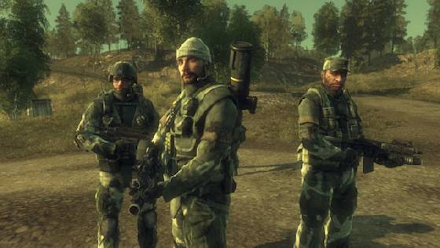 Battlefield: Bad Company, the console exclusive spin-off of the Battlefield series, is a game I had no interest in. The modern warfare genre was blindsided by Call of Duty 4 and for good reason; the game plays phenomenally. Fortunately for DICE and EA, Call of Duty 4 doesn’t tread over the entire modern warfare territory; they’ve left the large landscapes and vehicular based combat arena wide open. I asked our dear friend, Robocrotch, to try out the game on the Xbox 360 while I awaited the PSN release. Since this week’s Playstation Store update was late, I got my hands on it last night and gave it a whirl. Is it as bad as Robocrotch so bluntly stated? I found half of it to be terrible and the other half? Competent.

I’m going to associate the subtitle, “Bad Company”, with the single player half – especially the word “bad”. The single player tarnishes this title. The characters antics were as amusing as watching yokels banter, but the demo’s mission objectives themselves were trite. But that’s not the crutch of the game right? The on-foot shooting and gunplay should the game’s saving grace, however it just doesn’t feel right to me. The gun models are decent, but do they need to be so foreboding? Then there’s the unsatisfying gunplay itself; there’s just something off about it — it doesn’t feel right.

The gimmick of Bad Company is the destructible environments ranging from wooden fences and trees to pre-determined walls. I admit that being chased through a building while a tank blowing the crap out of it is riveting at first, but as soon as I realized that my life was never in peril, the entire experience fell flat. Lay the blame on DICE’s take on the rebounding health system. Instead of gradually recovering health by staying away from danger, I could simply stab myself with the Life 2 needle and instantly bring myself back to 100 at any time. I guess in order to avoid making the game too easy, you’ll have wait for this miracle of medical science to recharge, but that’s a small price to pay.

Obviously, death and I rarely met eye to eye in Bad Company, but when we did, it was because I was caught by insurmountable waist high crates or rubble. It’s disappointing, really. It’s like DICE learned nothing from their competitors which resulted in a single player component with little to no flare to keep me interested. Fortunately, the multiplayer half of the game was very much like the “Battlefield” games of old.

The featured game mode, Gold Rush, further concentrated the tried and true Conquest mode of the past by having the players focus on one or two “gold boxes” on the map. The attackers win by capturing the required amount of gold boxes while the defenders win by widdling down the attacking forces. Only the attackers are restricted by a finite amount of respawns. The game mode is enjoyable with all the land and air vehicles which made Battlefield 2 a blast to play. (The retail game will feature sea vehicles, but I never got to try it in the demo.) I got that Battlefield 2 vibe from the multiplayer, but it still doesn’t make up for the poor on-foot shooting. Firing bullets seems very ineffective when I’m given a half dozen grenade launcher rounds. There were classes available such as anti-tank and sniper, but I stuck with the basic assault. Peculiarly, just like the single player, side arms don’t exist and everyone can carry one primary weapon. You can pick up different kits off the battlefield though.

I was initially very impressed by the Frostbite engine. Perhaps the footage I watched was from a superior Xbox 360 version because I was not impressed with the PS3 build. The framerate isn’t a complete mess, but it’s several passes short from ideal. The slight screen tearing doesn’t help either. Anti-aliasing appears to be absent as well; it’s like steel wool or sand paper with all those tiny ‘jaggies’ everywhere. As for the sound work? It’s spotty. Sometimes it amazes while other times it just doesn’t deliver.

The Battlefield: Bad Company demo isn’t utter crap, but its overall package isn’t anything to write home about either. Although, I enjoyed the multiplayer, it isn’t something I haven’t played already with Battlefield 2. The prospect of 24 player dedicated servers is enticing, but not enough to warrant a purchase since core gunplay itself doesn’t jive with yours truly. I’m not inequitably bashing the game, but I do heed this warning: if you’re looking for Battlefield on a console, Battlefield: Bad Company’s multiplayer will mostly likely satiate, but if you’re already smitten with Infinity Ward’s take of modern warfare: give this demo a thorough run through before purchasing.