I found Resistance: Fall of Man, to be a competent shooter. I didn’t think it was terrible, but it wasn’t a mind blowing experience either. Insomniac Games’ Resistance 2 was poised to improve over its predecessor in every way, and for the most part, it did. An improved single player campaign, a more robust cooperative element and an impressive 60 player online multiplayer component was crammed into a single Blu-ray disc. Despite all of that, is simply being better than Resistance: Fall of Man enough to warrant your hard earned dollars? It depends. 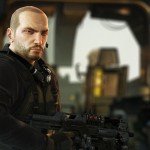 Resistance: Fall of Man did an admirable job with selling the alternate World War II timeline story. Creatures known as Chimera have taken over most of Europe and it’s up to the American and British armed forces to fend off the invasion. Nathan Hale was infected with same Chimeran virus which decimated Europe, but somehow he managed to resist transforming into one of them. Resistance 2 picks up several hours after Nathan Hale’s capture/rescue by mysterious Black Ops soldiers.

Unfortunately, Resistance 2 failed to propel the story forward until the very end. The 8 hours between the intro and the ending were a series of nonsensical events strewn together by recurring characters. The lack of a solid narrative was hugely disappointing. Insomniac wanted to retain a level of immersion by keeping the player locked into Nathan Hale’s head as much as possible which I commend them for trying, but when you’re hopping around America with only a few lines of dialog as context — it’s jarring. I’m not looking for explicit map plotting or narration, but I would like some continuity — throw in some vehicles segments to connect the two points if you have to!

So while the story doesn’t even hold a candle to the original, just about everything else excelled. I cannot remember the last sequel which changed this drastically within such a short amount of time. There’s no denying that Call of Duty 4’s massive success influenced Resistance 2. It became very apparent to me after I customized my control scheme to mimic Infinity Ward’s shooter — it just felt very familiar which isn’t a detriment to the game at all. A two weapon system was enforced and the segmented health system of the original game was ditched in favor of the more traditional rebounding health. Although, these change offered a more streamlined experience, I am not ignorant to the fact that these decisions eliminated several strains of originality.