Crytek’s Far Cry for the PC was quite the first person shooter for its time. A giant tropical island backdrop for Jack Carver and his adventure against mercenaries and conspiracy was a refreshing experience compared to the rest of the shooter pack. Far Cry 2 doesn’t star Jack. In fact, it wasn’t even developed by Crytek who went onto create the incredibly gorgeous Crysis. Far Cry 2 is its own game and only shares its namesake and the open world concept with its predecessor. Well, how did I like it? For better (and worse), Far Cry 2’s construction reminded me of their 2007 title, Assassin’s Creed. Now that I’ve got you scratching your head with intrigue, allow me to elaborate. 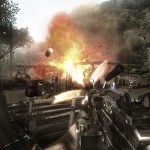 The Dunia Engine is a remarkable beast, producing one hell of an African setting filled with lush jungles and breathtaking savannahs. The rare frame drops and pop-in occur, but they aren’t frequent enough to offset the enjoyment of being able to traverse from one end of this vast African landscape to another without a single load screen. While that in itself is an impressive feat, it was the propagation of fire which set itself from the rest of the FPS pack. In fact, a large chunk of the world was susceptible to the destruction of fire and I found it to be a game altering strategy when I could use it. It was, however, a letdown to discover five Molotov cocktails ignited nothing more than a small camp fire’s worth.

And the tale which Ubisoft Montreal concocted for this African adventure? A missed opportunity. I thought the premise was solid enough; two African factions in the midst of civil strife and I was contacted to assassinate the Jackal, an arms dealer who was fueling the two sides. It turned out that I needed to work for both factions in hopes of gaining leads on the whereabouts of this elusive Jackal though. It didn’t matter who I chose to support, everyone was the enemy because coincidentally, I had to work as an independent agent in order to ward away suspicions – a flimsy reason to not differentiate the enemies. I may see a few logos or flags indicating who I was being pitted against, but it ultimately didn’t matter – I just had to complete the objective and kill anyone who stood in my way. 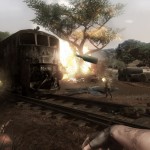 Establishing a large open environment for players to frolic through is one thing, but populating it with interesting things to do is a whole other task on its own. Assassin’s Creed failed to make something out of its world and Far Cry 2 followed a similar path. I didn’t find searching for hidden diamond briefcases, ransacking guard posts or searching for safe houses particularly entertaining five hours into the game. 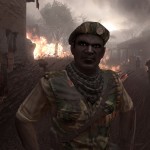 I felt that statement to be true. The second act was simply a remix of the first act casted with mercenaries who were equipped with improved firepower. The main story objectives did not even try deviating from the usual kill/destroy the objective scenarios. I can appreciate the open approach to these types of missions, but there’s only so many ways a person can do it before they’ve done it all.

With the technology and the story, there were many opportunities to avoid the feeling of repetition. They could have made it so that enemy guard posts, which I destroyed five minutes earlier, not magically reconstruct themselves. African soil isn’t that fertile, folks. They could have also toned down the frequency and predictability of the enemy encounters between major points of interest as well. When I am able to successfully anticipate when, how and the type of vehicle that will appear on a given path: there’s a problem. I also grew tired of hearing the same handful of objectives with the exact same circumstances surrounding them. In fact, the one of the few things I could predict with some degree of certainty were the malaria breakouts the main character suffered from. 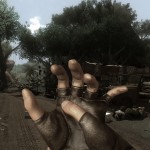 I’ll tell you what I’ve never seen before. I’ve never seen a person relocate his own elbow or force out a bullet with his own index finger in order to recover health; it’s a bit gruesome, but it was certainly unique. Far Cry 2’s visceral and grounded nature did not end with healing; it was also in the way the weaponry handled, how I entered vehicles and even how I opened doors. These qualities kept me playing. All this to say that even the dumb drones known as my enemies did not dampen the experience as much as I thought it would; that’s a testament to how enjoyable the gunplay and the basics were.

I was also a fan of what their “Buddy” system offered. These NPCs were other mercenaries who were looking for ways to get out of the country and its problems. They offered alternative methods of tackling the main objectives, side missions and were able to help carry me to safety when I was downed by gunfire. I had to be careful though. They were not impervious to gunfire. I only wished they were able to tag along for more missions and didn’t speak at such a fast pace.

Like with Assassin’s Creed, I enjoyed the first several hours of Far Cry 2. Its immersive qualities were simply among the best in the genre. A substantial amount of effort was devoted into keeping me immersed and sold on this African wilderness. Running up a hill in the cover of darkness with nothing, but the celestial lights, the rustling of grass and the shadows of tree branches – I was completely into what Ubisoft created. As first impressions go, Far Cry 2 did one hell of a job. However, then it starts showing me the same tricks over and over again. What was once entertaining became annoying. What was once believable became unbelievable. Far Cry 2 isn’t a bad game per se; it just feels copied and pasted a few too many times. If you can stomach that sort of repetition in your shooters, by all means pick this up. If you can’t at least give it a whirl; there are a ton of great ideas in here.

Verdict:
Worth a Try

For more information on Far Cry 2, visit the official website.