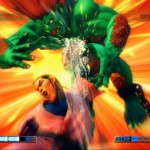 Moving from hand drawn 2D sprites to 3D polygonal models could have been a disaster. However, Capcom and the Dimps developers managed to infuse the charms and expressive nature of the human hand into Street Fighter IV. The wincing of pain, the shock of an incoming Ultra combo and the gestures of victory; Street Fighter IV animates unlike any other Street Fighter game. The classic Street Fighters now sport a simple yet vibrant look which could easily withstand the advancement of time. And it all of it flows beautifully.

The opening song may test the tolerances of many, but beyond it is an audio pleasantry. The famous tracks of the classic fighters were remixed without veering away from the source material too much; it was well thought out. Capcom was even thoughtful enough to provide us with the option to select voiceover language on a per character basis.

All the animated dressings and other niceties were appreciated, but we all know that’s not why we play fighting games. This game was pegged as a spiritual successor to Street Fighter II and in many ways it is. The tried and true fighters returned with their moves intact and, for the most part, played as I’d expect them to. But that’s about the extent of the similarities. Street Fighter II fans can still find the classic game they loved in Street Fighter IV, however there’s so much more layered and buried within the game.

Capcom may have loosened up the timings required to pull off special moves and added Challenge modes to teach a handful of possible combos for each character, but that’s just not enough to bring up a new comer’s game. There’s a lot of theory behind a fighting game and it was unfortunate that Capcom did not take the opportunity to teach it all with Street Fighter IV. I wouldn’t say that an arcade stick is necessary, however I will recommend it to anyone who sees themselves wanting to improve their game. But hey, what do I know? My brother plays on the Dual Shock 3 and he’s not complaining.