The problem with having played so many first person shooters is that when a game like Killzone 2 comes around, it becomes increasingly difficult to surprise and woo me. I curse myself for having played what preceded it. Guerilla Games’ meticulously crafted diamond isn’t a particularly unique gem. Its cut doesn’t distinguish itself from the pack, but its the polish and its precision will undoubtedly attract onlookers. And that’s not to say that I see Killzone 2 as merely another first person shooter – I’m actually quite fond of it. 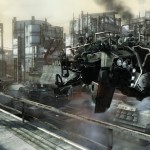 I wouldn’t say the game starts off on the highest of notes. For a game which is essentially about a new breed of “Space Nazis”, you’d think they at least try to steer away from the typical “World War II” scenarios. But even with flying craft to shuttle personnel around, they still managed to somehow wind up on a beach.

After the cliché start, Killzone 2 began to exert and establish itself. Hugging a wall with the first person cover system, while looking down the green scope of an ISA assault rifle felt natural and honestly, cool. At the veteran difficulty level, the cover system was invaluable. The Helghasts utilized cover as well and moved about in what I could only describe as annoying.

But don’t take it the wrong way.

After playing so many other shooters where enemy tactics consisted of bobbing up and down like some carnival game, the Helghasts operated as if they were indeed the trained special ops soldiers they’re made out to be. Well most of them did anyway. There were a few types who preferred the carnival games approach and some who even preferred the rushing tactics. Mixed together, the result was a mishmash of intelligent aggression.

With such an impressive artificial intelligence system, it was strange to witness two things. One, the lackluster performance of my colleagues. And secondly, the decision to take a page from Call of Duty’s book of enemy encounters. My in-game buddies were morons who enjoyed the sting of bullets. Their incapacitations did not bother me, but streaming endless waves of enemies who can only be stopped by some invisible trigger point did. I wouldn’t have drawn attention to this dirty tactic if Guerrilla Games did not decide to switch it up late into the game. 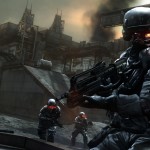 For the most part, Killzone 2’s pacing was gradual with only a few instances of absurd difficulty spiking. Differing locales were stitched together with trivial events which couldn’t be more forgettable. In fact, the weaponry and enemy encounters themselves were far more memorable due to the intense atmosphere. I also have to commend the dev team for shuffling the locales and approaches because I spent just enough time with something before it became a chore. Well unless it was one of those difficult ones that I mentioned.

Along with vulgar dialog, cutscenes were used to unravel what little story there was. I couldn’t help, but notice the schizophrenic nature of its execution though. While “in-game”, the developers went to great lengths to keep everything in first person. However, when I am greeted with cutscenes, I am watching events unfold around the protagonist, Sev, as if I was another soldier within the squad. It’s not a point of contention for everyone, but I thought it was awkward enough to point out.

Killzone 2 was quite the compilation. It honestly felt like a “Greatest Hits” album comprised of all the best bits and pieces of past first person shooters. The result was an excellent first PlayStation 3 entry by Guerilla Games. Some of the borrowed pieces worked well, some didn’t, but in the end it was all buffed to a brilliant shine. First person cover system, extremely capable foes and a knack for intense battles kept me locked within its  grip. I may not have enjoyed every single moment of it, but at least I could say that it was a fun ride. And no, I did not forget the fact that it was a gorgeous looker of a game. And no, I did not have issues with the controls — I just wished they used the multiplayer version of it.

I’ll explain why along with multiplayer impressions at a later date.

For more information on Killzone 2, visit the official website.