WiiFit, the last piece of software which I turned on my Nintendo Wii for. Sad isn’t? There has been quite a drought of appealing software for Nintendo’s console in shiny white plastic. Platinum Games heeded the call and promised a blood and cuss filled brawler. To my disappointment, we were given a cleverly disguised collection of violent mini-games.

But don’t be quick to discount it yet. 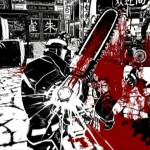 MadWorld’s logo is the perfect depiction of how the game looks. The black and white styling with the splattering of red was unique and advantageous considering the hardware it was running on. I was pleased to discover that a great deal of effort was put into differentiating the levels and to keeping the characters from being obscured by said backdrops. Kudos to them for pulling it off.

They also did a remarkable job with the first impression. MadWorld doesn’t clutter the opening moments with story. After spending a few minutes learning how to impale people with objects and dunk them into barrels, the DeathWatch games officially began. 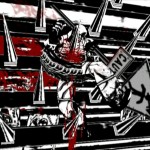 Part sport and part game show, DeathWatch is just like any other fighting tournament. As Jack, it was up to me to maim, decapitate and kill my way to the top. Getting to these fighters required fulfilling specific point requirements through the use of the aforementioned killing actions. Simply grab those brain dead enemies, apply point modifiers and then finish them off as gruesomely as possible.

Then rinse and repeat. Many times over.

If only there were more fundamental differences between the levels. Be it stop signs, or lamp posts, these objects served the same purpose; they’re used to pierce skulls to increase point values of each kill. Murder contraptions, weapons and mini-games like “Man darts” mixed things up a bit, but it didn’t take long before everything homogenized.

I always looked forward to doing battle with the DeathWatch fighters. Disappointedly, these eventual boss duels boiled down to following onscreen motion gestures for massive damage. The alternative was to use Jack’s retractable chainsaw, however its effectiveness left a lot to be desired. I enjoyed their designs though. They were stereotypical, but each one of them gave off that “I’m the big bad boss” vibe. Too bad it was just smoke and mirrors.

When the monotony of the game began to wear on me, the story began to manifest. Was it worth sticking through until the end for? Not particularly. But, at least the color commentary was exceptionally crude and entertaining throughout.

Like I mentioned earlier, MadWorld was great with first impressions. Flinging dudes into spikes and decapitating them with golf clubs was a riot for the first couple of hours. But like with any mini-game collection, I grew weary of these repetitive games after the novelty wore off. The flimsy context didn’t help either. Would have I been happier with a shorter game? Yes. There is quite a bit of fun in MadWorld; however it’s a great example of stretching a handful of great ideas too thin.

Verdict:
Worth A Try

For more information on MadWorld, check the official website.