I’m typing this post on a Technical Preview build of Microsoft Word 2010 which is sitting comfortably on top of the Windows 7 Release Candidate. It is the laptop of the future – today! Office 2010 will not be arriving until sometime early 2010 while Windows 7 will debut this holiday season. They could have fooled me though; these early builds are exceptionally stable for me thus far.

Keep in mind that this is officially day one of my time with this new setup. Bugs could rear their ugly heads down the line, but I’ll have plenty of time to find out.

Windows 7 is to Vista as Win98 was to Win95. The changes between the two iterations aren’t drastic, but they’re significant enough to warrant an upgrade. I advocated Vista wholeheartedly. I even went out of my way to install the O.S. on this Mini 9. I do recognize its bloat filled and cumbersome nature. Windows 7 rectifies both of these irksome characteristics. 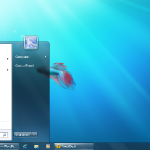 The Release Candidate is already slimmer in physical size compared to its predecessor and through the magic of vLite, I was able to slim it down to less than 1.9 GB without shedding away features aside from languages. I’m not sure if this is the final size of Windows 7, but it’s a promising sign. With avast! Antivirus, Microsoft Office 2010 (Word, PowerPoint & Excel), a 2 GB pagefile and a handful of small applications installed, I’m left with 5.88 GB worth of free space in my 14.3 GB solid state drive. And remember, I have not stripped away many core features.

Installing Windows 7 was as painless as Vista’s. Unlike Vista, nearly every major component was working post-install. In fact, my Dell Mini 9’s wireless was working right off the bat! Windows Updates picked up all, but three components including a piece of the ACPI and the card reader drivers. In addition, I installed the touch pad drivers for increased functionality. 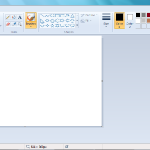 I’m not going to get into the scientific and professional benchmarking of Windows 7 vs Windows Vista. Instead I will give a few anecdotes. I’m not sure what Microsoft tweaked, but Windows 7 simply feels smoother. Vista worked well enough on the Mini 9, but it wasn’t like Vista on the desktop. Windows 7 feels exceptionally snappy. What’s even more impressive was the fact that Windows 7 looks even nicer than Vista and still manages to perform.

Windows 7’s look is a lot more coherent and refined. The little apps like calculator and Wordpad have been given that last spit and polish which was missed from Vista. The new taskbar and its Mac-like abilities is an embodiment of what Windows 7 is all about. It’s familiar and improved; just like the rest of Windows 7. 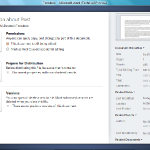 As for Office 2010? It’s more or less the same thus far. It’s prettier and a bit more visual with right click menu and “File” menu changes. The divisive ribbon makes its way across all of Microsoft’s applications and as a fan of it, I’m pleased. I cannot find any other significant changes with this Technical Preview as of right now, but keep in mind that it is very early.

I’ve never worked with preview software like this before. I’ve installed early betas, but nothing like this. I’m enjoying what I’m tinkering with thus far and I hope it stays this way until release.